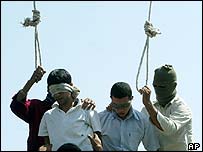 Homosexuality is illegal in nearly half of the world's nations. In most of those countries which ban consensual adult same-sex relationships, the penalties range from a few years in jail to life imprisonment. But in the case of seven countries, all governed by Islamic law, the sentence is death. Two of those countries, Saudi Arabia and Nigeria, will sit on the U.N. Human Rights Council in 2009. The picture here shows two young gay men about to be hanged in Iran. In May, Britain granted asylum to a gay Iranian teenager studying in London who feared execution by Iranian authorities after his boyfriend was hanged for 'sodomy'. Iranian human rights campaigners say more than 4,000 gay people have been executed in their country since 1979.

The United Nations appears now increasingly minded to end the criminalisation of homosexuality, and later this month the UN General Assembly will issue an historic declaration calling for the decriminalisation of homosexuality across the world. It's historic because the General Assembly has never before considered the rights of the global gay and lesbian population in any convention, declaration or humanitarian law.

Why, then, is the Vatican opposing this new Declaration?

The official position of the Catholic Church is that same-sex sexual activity is sinful. The church also claims that adultery is sinful, but it is not suggesting that wayward husbands should be put in prison. So, does the Vatican support the criminalisation of gay and lesbian people?

That's how this story is being run in some press outlets following an interview given to the French media by Archbishop Celestino Migliore, the Vatican's permanent observer at the United Nations. The pope's press officer, Fr Federico Lombardi, is now engaged in something of a damage-limitation exercise. Fr Lombardi is emphasising that the church has an outright opposition to the death penalty and, in respect of lesbian and gay people, the church re-asserts its opposition to "all forms of penal legislation that are violent or discriminatory towards homosexual persons". In plainer language, the Catholic Church is opposed to laws which criminalise consensual same-sex relationships.

Why, then, is the Vatican also opposing a UN Declaration that calls on the world's nations to strike down those laws? The Vatican is concerned that the new Declaration could result in "control mechanisms according to which, norms (not only legal, but also relative to the life of social and religious groups) that do not place each sexual orientation on the same level, would be considered contrary to respect for human rights." In other words, the church is worried that its theological opposition to same-sex sexual acts, gay marriage and same-sex civil unions, could be portrayed as an attack on human rights and make the church and its agencies liable to "discrimination" byb state or international bodies in the future.

Supporters of the UN Declaration regard that logic as "grotesque".