How wrong is Rowan Williams? 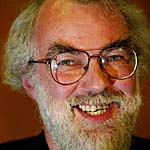 One of my regular Will & Testament bloggers thinks Rowan Williams's analysis of the international financial crisis is "wrong". In fact, John Wright thinks the archbishop is this wrong:

"I couldn't object to a single paragraph more than if the devil himself boomed it from hell with flaming nostrils. Williams is wrong, wrong, wrong. He couldn't be more wrong than if he claimed Clay Aiken isn't gay after all. He couldn't utter a more contemptuous statement than if he was telling us that the church planned to raise Harold Shipman from the dead and ordain him as a bishop zombie. The statement is as wrong from right as George Michael is from Albert Einstein. It's as objectionable as a pedophile in Disneyland. It's as idiotic as Hitchens being waterboarded. If my own precious five year old child said something like that, I'd spank his face with a Louisville Slugger. It's enough to make a drunk sober. It's enough to make Mother Theresa flip a middle finger from the grave. This Rowan Williams. He's sipping from the Fallacious Cup. He's eating from the Bonkers Bowl. He's a maniac. He's wrong."