Mary Robinson and the constitutional question 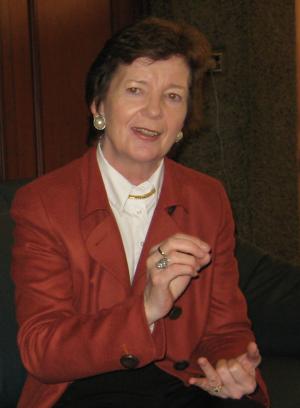 Today's Sunday Sequence included my extended interview with the former Irish President . We talked about the remarkable changes we have seen in Northern Ireland since the signing of the Good Friday Agreement, the transformation of the moral landscape of Ireland during and since Dr Robinson's tenure as president, and the "bullying" she experienced from the Unites States in her subsequent role as UN High Commissioner for Human Rights.

I asked Mary Robinson if the great changes Ireland has undergone, north and south, in recent years mean that we have moved closer to a re-united Ireland. Perhaps significantly, given that she speaks as a former president, Dr Robinson said this constitutional question "isn't on the agenda" and "doesn't need to be on the agenda". In fact, she said, the notion of a united Ireland " isn't even relevant to the context of what is happening [here nw] ... There is no constituency of pressure for a united Ireland." She explained that when asked by Irish Americans, "Do you see the day?" she replies, "Not really."

You can listen again to this interview on the Sunday Sequence website.