At home with GBS

A late-in-the-day post following my whistle-stop tour of Shaw's Dublin on this the 150th anniversary of his birth. The day began at 33 Synge Street, Shaw's birthplace in south inner city Dublin (pictured), where Angela Grayson was my guide. Standing in the bedroom where Shaw was born, Angela explained that he had been born feet first -- and a breech birth seems like a perfectly Shavian entrance. I was expecting a blue plaque marking the great writer's birth on the exterior of this very modest Victorian terrace. Instead, there is a sizeable marble memorial at the side of the door, and this reads: "BERNARD SHAW: AUTHOR OF MANY PLAYS WAS BORN IN THIS HOUSE, 26 JULY 1856". Quite an understated description of Ireland's first Nobel prize winner and the author of more than fifty plays who, at one time, was the most widely produced English-language dramatist after Shakespeare.

In the drawing room, where Shaw played piano as a child, we were treated to a lovely recital by the singer and actress Eileen O Sullivan. She performed "The Angel's Message", a typically melancholic Victorian song written by Shaw's mother Lucinda Carr Shaw. As I looked out from the window of Shaw's bedroom, on the first floor at the back of the house, I reflected on how unhappy his childhood was -- an emotionally distant mother who loved music but deprived him of basic lessons on the piano he loved, and an alcoholic father. No wonder he took refuge in the National Gallery of Ireland, a ten-minute walk from the family home, which was where he fell in love with art. 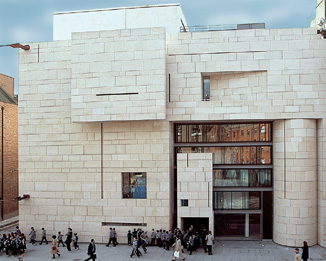 That was my next stop. I met up with Raymond Keaveney, the Gallery's current director, in the room housing Giovanni di Paolo's extraordinary Crucifixion (c. 1450). This is one of seventy-seven paintings and fourteen sculptures acquired by the gallery since Shaw's death in 1950 as a result of his bequest. The money has also partly-funded the building of the magnificent Millenium Wing (pictured). Richard explained that Shaw's legacy brings in about a quarter of a million euro annually -- a very useful addition to the Gallery's budget which will continue until the copyright on the author's works runs out in 2020.

A few rooms away, the Curator of British Art, Adrian Le Harival, introduced me to the wonderful stature of Shaw by the Russian sculptor Prince Paul Troubetskoy which is the centre-piece of their anniversary exhibition. Then the Gallery's archivist, Leah Benson, showed me original letters and documents relating to the Shaw bequest, including the now famous postcard Shaw wrote in 1944 to a former director of the Gallery in which he mooted the idea of including the Gallery in his will. I also saw the original, handwritten minutes of the Gallery's Board meetings at which the legacy was discussed. It seems clear that the Board, at the time quite understandably, thought this would be one of similar bequests that sometimes come their way. Neither they nor Shaw could have anticipated the extraordinary success of the Broadway and Hollywood versions of My Fair Lady, following Shaw's death, and how this would transform what looked like a modest gift into a multi-million pound legacy.

The actor and director Alan Stanford gave a presentation in the afternoon, in the Shaw Room appropriately enough, and I interviewed him a few minutes before he went out to a packed auditorium to extoll the virtues of Shaw's literary legacy. Alan is a busy man: he is simultaneously director of the production of The Constant Wife currently playing at the Gate Theatre and performing in Conall Morrision's production of The Importance of Being Ernest at the Abbey Theatre. I asked him why there is not a single Shaw play being staged in Dublin at the moment; he fears that Dublin has 'forgotten' Shaw. Perhaps -- though Pygmalion was last staged at the Gate just two years ago. 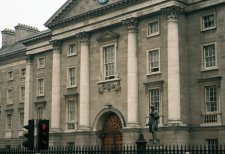 From the National Gallery to Trinity College, Dublin, to meet Professor Nicholas Grene from the School of English. He calls himself a 'Shaw Partisan' and he has an encyclopedic knowlege of all things Shavian, as befits the author of critical studies of Shaw and the introduction to a recent edition of Pygmalion. We talked about Shaw's attitude to Ireland, his political philosophy, the various stages of his development as a writer (from art and music critic, through experimental novelist, to playwright), and his relevance and appeal today. A perfect end to a day of exploration in Shaw's Dublin.

Now all we need to do is translate all of that into a 20 minute radio programme. It may prove easier to produce a Shavian version of the Dublin phonebook.

One last thing. Today's Irish Times included an excellent full-page article on Shaw -- "Superman of the modern age" by Peter Gahan -- and a very thoughtful editorial making a case for the restoration of Shaw's reputation in Ireland: "[the] best of his work deserves its place in theatrical immortality and his reputation here deserves some measure of restoration. A production of at least one of his plays during this anniversary would have been a good start." Alas, the same editorial, in a list of his "better known works for the stage", Shaw's anti-imperialist black comedy Heartbreak House is accidentally renamed 'Heartbreak Hotel'. Oops.

Shaw and music. As you point out, Shaw was a music critic for years, famous for his devastating reviews: the music of Mozart ("Don Giovanni") is an integral part of "Man and Superman," which, among other things, shows the influence of Nietzsche, an important figure of that time.
On the question of literature, there was a division in the 20th-century between the "literary" literature of Yeats, Joyce, and Eliot, and the rather more accessible work of Shaw and, shall we say, G.K.Chesterton. I think it possible to value both.

Jawharlal Nehru (1889-1964), the first Prime Minister of independent India (1947-64), had lived in London as a young man when Shaw's plays were first being produced. In later years, he wrote to Shaw asking if he could call on him at home not to ask questions but simply to spend a few minutes in the great man's precsence. There is a photograph of them together.

The poet Philip Larkin(1922-85), author of the agnostic "Church Going," who lived for five years (1950-55) in Belfast, where he was a librarian at Queen's, was asked what books he would like to take with him to his Desert Island (on the well known radio programme). He named the Collected plays of Shaw, commending them for their invigorating sanity. Not the least impressive thing about Shaw was his Methuselah-like longevity.
Given his iconoclastic temperament, it is not surprising that Shaw deplored the routine worship of Shakespeare, which he christened Bardolatry.