Faust in a Sash 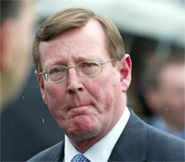 He wasn't biting his tongue tonight. Speaking at the launch of Brian Kennaway's new book The Orange Order: A Tradtion Betrayed, the former Ulster Unionist leader expressed his disappointment at how the Order's leadership had behaved in recent years.

Though Mr Trimble was careful to say he was himself still a proud Orangeman, and planned to continue his membership of the Order, he took aim at the Grand Orange Lodge of Ireland. He highlighted two episodes in particular that clearly angered him: (1) The apparent misrepresentation, before a House of Commons Select Committee, of the results of a secret ballot in the Portadown District on the question whether to reverse the Order's policy of not engaging with the Parades Commission; and (2) the Grand Lodge's failure to circulate a letter from Mr Trimble giving his response to the Order's concerns regarding the Belfast Agreement.

The behaviour of the Orange Order's leadership over the Drumcree stand-off were tantamount to a participation in a "Faustian Pact", Mr Trimble claimed: dark forces within Northern Ireland were happy to use the Loyal Institution to create and exploit disorder on our streets in an effort to bring down the Good Friday Agreement.

Mr Trimble's remarks surprised some in the room by their directness. And it was large and wide-ranging gathering: Ruth Dudley Edwards, Fr Tim Bartlett (representing the Catholic Primate, Archbishop Sean Brady), the national secretary of the Hibernians, the American Consul-General, the Presbyterian Moderator, various grand masters from the Orange Order, the former IRA volunteer Anthony McIntyre, academics (such as Paul Bew and Richard English), British and Irish civil servants and Stormont officials.