The London doctor who carried out stem cell injections on British patients at clinics in Holland and Belgium should be "struck off" the medical register, a disciplinary panel of the General Medical Council (GMC) heard on Monday.

Dr Robert Trossel, 56, has already been found to have exploited vulnerable patients. Many of those he was injecting with stem cells were suffering from multiple sclerosis, for which there is currently no cure.

Tom Kark, from Field Fisher Waterhouse, speaking for the GMC, said: "They were all vulnerable patients who already found themselves failed by the medical profession in this country and as a result were searching, some with desperation, for a cure or relief elsewhere, which is why and how they ended up in Dr Trossel's hands. 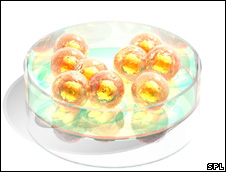 Dr Trossel used stem cells not designed for human use

"They were given false hope by him and the experience not only cost them financially but for the most part it caused them personal and emotional loss when they realised that the treatment provided to them was not only expensive but pointless."

Mr Kark reminded the panel that Dr Trossel had also injected some of his patients with a material from Germany called Regeneresen, which contained live bovine brain and spinal cord cells, without explaining what he was injecting into them, or getting proper consent.

He described him as a "genuine and compassionate". He said Dr Trossel was "neither driven by love of money nor love of self" and had made it clear to patients that stem cell treatment was an experimental and untested therapy.

The panel is now weighing up this and other submissions behind closed doors, including its own finding in April this year that Dr Trossel was "taking unfair advantage of vulnerable patients and was therefore exploitative of them", and that his behaviour constituted "repeated and serious breaches of the essential tenets of good medical practice" earlier this month.

The GMC placed restrictions on Dr Trossel's work as a doctor in 2007, after a Newsnight investigation in 2006, which revealed that he was injecting patients with stem cells not intended for human use, but for research purposes only.

After a lengthy hearing process, the GMC panel ruled earlier this month that Dr Trossel's fitness to practice as a doctor is impaired, stating that he had "demonstrated little insight into the seriousness of your misconduct and the effects this may have had on your patients", adding that it was not convinced that his misconduct would not be repeated.

His patients paid around £10,000 or more for stem cell injections for a variety of conditions ranging from spinal injury to multiple sclerosis. Families raided pension funds, or organised fundraising events among friends and local communities to find the money.

Many of his British patients had reached Dr Trossel after contacting a web-based company operating out of South Africa, called Advanced Cell Therapeutics (ACT).

Newsnight established in 2006 that ACT was run by a couple called Stephen Van Rooyen and Laura Brown, who are wanted by the FBI for stem cell fraud under an extradition arrangement with South Africa. They failed in an appeal against that earlier this year.

Mr Jay, Dr Trossel's lawyer, argued on Monday that in his dealings with ACT "like Icarus, he flew too close to the Sun" in over enthusiastic pursuit of what he believed to be an exciting new development for his patients.

The GMC has already decided that in its view Dr Trossel "exaggerated the benefits of the treatment, overstated the success rate in treating patients with MS, and failed to inform patients fully of what was contained in the freeze medium in which the stem cells were delivered, namely that it contained bovine calf serum".

The panel said Dr Trossel's offer of such treatments was "unjustifiable on the basis of the available scientific or clinical medical evidence, inappropriate, not in the best interest of the patients and was exploitative of a vulnerable patient. It was therefore an abuse of his position as a doctor".

Dr Trossel has admitted that he did not inform some of his UK patients that he was separately injecting them with additional material which included bovine brain and spinal cord. The panel therefore found that informed consent could not have been given, an omission which the panel on Monday described as "serious".

The doctor had earlier told the panel that he had since had a "change of heart" about stem cell therapy, and that he should have been more careful in the advice he'd given to patients about its efficacy. He also said he regretted not having followed up patients with more scrutiny.

Dr Trossel has admitted many of the facts of the case, but in his defence he has argued that he stopped injections as soon as the Newsnight investigation made the origin of the stem cells clear.

As Newsnight's science editor I meet some of the most interesting people around. They might be trying to understand the Arctic or the latest flu virus, or working on new ways to treat cancer, produce energy or feed the world. Along with policy makers and shapers of all political shades, they offer a challenging perspective on today's world, and a tantalising glimpse of the future.

You can stay up to date with Newsnight: Susan Watts via these feeds.