Wim Wenders: With 3D "the door is open". Interview. 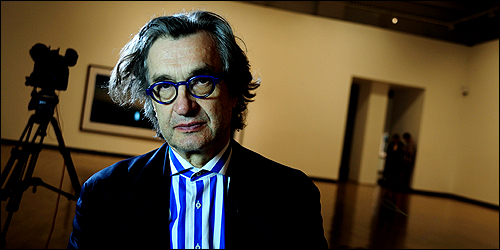 "Pina is trying to say the most simple things," says Wim Wenders, his voice close to a whisper: "Pina invented an art that is so obvious it's unbelievable that nobody came up with it. Pina is interested in who we are and what moves us."

In 2009 Wenders, the acclaimed film director, was about to begin a documentary collaboration with German choreographer Pina Bausch, chronicling her work at the Tanztheater Wuppertal. But Bausch died suddenly, days before the shoot was to begin:

"I cancelled the film. I pulled the plug - it seemed impossible. And weeks later I realised it was the wrong decision; there was still a film to make about that look and her work. And there was still all these pieces that she'd programmed at the theatre, so we could film it together."

The result is Pina: Dance, dance or we are lost - a visual memorial for Bausch: her work, as always, challenging, troubled and now shot as dance has never been shot - up close and in 3D.

There are Wenders' trademark shots, drifting in and out of the dancers' POV. There is closeness, immediacy; even the rain in Bauch's watery masterpiece Vollmond seems to have mass. Every drop. For Wenders the new medium is a revelation:

"I thought it would be good to be close. And with 3D you not just have a close body you feel the aura of a person. All of a sudden the body has a volume. All of a sudden there is a different physicality that you ever see on a screen. I wanted to take the audience as close as possible to these people and to their horror."

For Wenders the Pina documentary is the latest stage of a long journey. In Wings of Desire he commemorated the last days of Cold War Berlin; with Paris, Texas and Until the End of The World he took the road movie to new extremes - then switched to documentaries, celebrating the music of another iconic city, Havana, in Buena Vista Social Club.

He sees the move to 3D as something historic and irreversible in the development of cinema. But it's a medium that's hardly been explored: there are a dearth of scripts, written to exploit the possibilities, says Wenders:

"I'm working on it. I'm trying to find a story that has that affinity. It's not obvious I must tell you. Cinema has done marvelous things for more that a hundred years with the language we had. We used dollies and put the camera into helicopters and cars and on our shoulders and stuff in order to create the fiction of cinema. Now we have the access - and nobody walks through the door for heaven's sake!"

It was Georges Méliès, in the 1890s, who switched cinema's path of innovation from "how do you make a better camera?" to "how do you mix closeups with wides"? Not stopping there, he moved quickly to multiple exposures; nudity and science fiction. Within ten years of its invention, arguably, all the genres and most of the techniques of 2D moving imagery had been discovered. Now we're at the very beginning of that process with 3D.

Does Wenders think cinema might become closer to the subject with 3D, less reliant on the editing techniques and semi-theatrical shot lists?

"It can transport you there. The horizon is over there - plus you have something close. And you are, as an audience, taken into somebody's world and you can visit it. That's what you could never do in a movie. There was always that distance of the artificial two dimensions. "

"With 3D there is a whole new technology and that is obviously pushed by the industry. And there is also a language. The language has to be used by people who are interested in it; who can extend the realm of expression. And I don't see the studios doing that. They have no interest in that. But that's the history of cinema. It's always been both industry and expression."

Wenders is visibly transported when he speaks about the new medium: his eyes shine. He speaks of 2D cinema as "the flat screen" - ignoring the fact that 3D is merely a flat screen and a pair of crazy spectacles. He speaks of 2D as "movies" and, implicitly, 3D as something else.

He had been in negotiations to direct Wagner's Ring cycle at Bayreuth, and film it in 3D, but talks broke down. So is there anything else he'd like to direct in the new format?

"The other thing I would like to do is find a story that could use 3D, that could not be done any other way. Over all I feel we have only scratched the surface: there is so much left to discover.

Could he go back to two dimensions?

"Going back is already the expression. I feel that it would be going back. The door is open. I have all these wide spaces now. I want to go there."

Wenders is in London open an exhibition of his stills photography, at the Haunch of Venison. Shooting handheld, on film, as he's done since childhood, he produces giant often empty scenes:

"A lot of my movies start with a desire to explore a place. Most of my movies start with first - a sense of place. Then you have a story and characters and before you know it they take centre stage. And characters take over. And the places necessarily step in the background. In photography I can do the opposite I can give the place the central part and the people who show up are the extras."

Some of Wenders' photographs explicitly reference the look and feel of American painter Edward Hopper. As with Hopper, the loneliest scenes occur when he dispenses with the human subject altogether and conveys the loneliness of a scene by the simple absence of life and movement. How big an influence was Hopper?

"Hopper was a great experience in my life: I was blown away with not only the formats but also the subjects. Cities - lonely people, alienation. In a strange way it coincided with making moves about similar subjects. I was facinated by the cities - I was facinated by the lonesomeness and Hopper became my hero painter. Also, in my photography, I'm more interested in the history of painting than in the history of photography."

Both Wenders and Pina Bausch were products of post-war Germany: both, effectively, ripped up and started afresh their respective genres - Wenders famously improvising an entire film on set in Wings of Desire, the set being the bombed out bohemia of West Berlin in the 1980s; Bausch forced dancers to stumble, eyes closed, through the angst-ridden chair-scape in Café Muller, to beat their chests and hyperventilate a the soil-strewn stage for Stravinsky's Rite of Spring. Says Wenders:

"Pina realised she was looking for someone else. Something deeper, something more human something existential. She didn't want to change dance - she said let me start again."