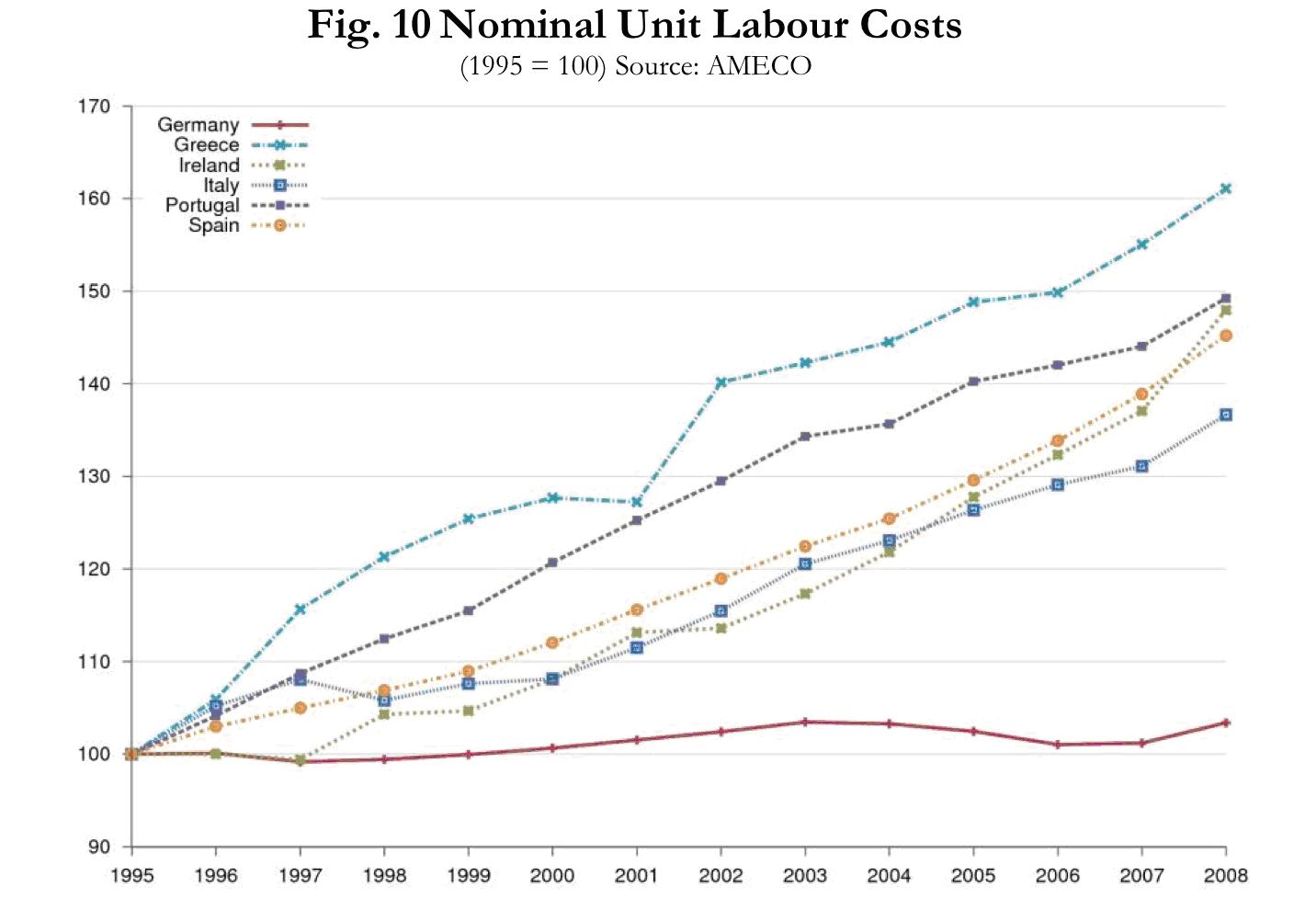 It's Vorsprung Durch Technik versus "manyana", cold efficiency versus laid-back Mediterranean sloth, it's the Europe of no motorcyle helmets versus the Europe of precise train timetables. It is every cultural stereotype you've ever heard about the two kinds of people who inhabit this continent.

And for now, economically, it's valid: there are two Europes and they are diverging.

It's no longer a two speed Europe: it's a two tier Europe with the bottom half spiralling into low growth, penury and social crisis - and the top tier is booming. German industrial output, up 15% year on year today, stands in contrast to a slump in Ireland, Greece and now - once the austerity kicks in for real - Portugal.

Portugal last night joined the club of countries needing a bailout. It'll probably take E80bn to sort out - but that's not the problem. The problem is the conditions attached will be further austerity: the very austerity the Portugese parliament rejected; and - from an objective standpoint more important - which will make it difficult for Portugal ever to grow its way out of crisis.

Onto this two tier Europe - Greece's economy has shrunk by 6% over two years, Ireland's by 11% - the ECB today heaped more pain. To combat aggregate inflation at 2.6% it has raised interest rates. To the cries of pain that this will weaken the recovery in the stricken countries it has plugged its iPod in and listened to its same old mix of theme tunes: independence; price stability; the belief that the current crisis can be solved by cheap, rolling loans, their terms loosened ever onwards as the real economies doing the borrowing shrivel up and starve.

What's the source of this great divergence? It starts with the design of the Eurozone itself: many economists believe Germany was allowed to join at a devalued rate, obtaining a permanent trade advantage with the south. Then, just as the periphery glutted itself on unsustainable private debt - the credit cards, the four-wheel drives, the extra villas by the shining Med - Germany enacted labour laws and welfare reforms entitled Agenda 2010, which, as its critics write, allowed German bosses to squeeze their workers just as bosses in Ireland and southern Europe were doling out extra pay and benefits to their.

The graph at the top of this post shows the results (thanks to Costas Lapavitsas at Research on Money and Finance).

There is a huge competitiveness mismatch and a resulting huge trade mismatch. The south became an export market for north-European manufactured goods, and a credit market for the north-European banks - which may have been technically constrained to be dour and presbyterian by domestic law but nevertheless piled into the Irish and Spanish property bonanza with gusto.

We are now in the process of picking up the pieces but it's not easy.

In the first place, the level of austerity being demanded in southern Europe and Ireland is starting to challenge these populations' very concept of the social deal they thought they had. I am not talking about the Euro, the social chapter: it's what they thought they'd achieved by throwing off fascism, military dictatorship or in the case of Ireland decades of isolation and backwardness.

What the new fiscal reality says to them - and the new reality of having the ECB tell them their interest rates have to go up even as their economies go down the pan - is that the social deal was an illusion.

There is now growing traction for the idea of a controlled, voluntary default by the three stricken countries. That is, they restructure their debts and banks and pension funds in France, Germany and Britain take the hit. The longer this can be postponed, the better the shape the banking systems of these countries could be in to take the hit. But there are growing calls for example among unions and left wing parties in Ireland, Greece and Portugal to declare the debts "odious" and repudiate them.

But a default would break the rules of the Eurozone (they're being flouted anyway). And what is not often understood, meanwhile, is the amount of support being effectively given to the periphery by Germany's central bank, via the ECB's liquidity operations (put simply, the ECB issues short term loans to countries on terms that put at greater risk the money that's supposed to be risk free supplied by the Bundesbank).

The two, logical, technically elegant solutions are these:
a) the periphery leaves the Eurozone
b) the north takes control of the whole system but pays the price through a fiscal union in which taxpayer Euros in Hamburg and Helsinki pay for benefits in Athens and Athlone.

It will be noted that b) is unpalatable to the electorates of north Europe, and anything approaching it is proving so unpopular that it is altering the electoral landscape - in Germany and Finland and probably soon in France (Belgium doesn't have an electoral landscape and the Netherlands, with the rise of the right, was already well and truly altered).

However (a) is becoming very palatable: not just to the leftish plebeian masses in the stricken countries but also to the electorate of north Europe.

A way between these two extremes could be negotiated if there were skilled, authoritative, charismatic leaders but... I don't even need to finish the sentence. The EU is not very good at leadership and vision right now: it's good at fiascos.

And in his justifications for the rate rise - technically correct and defensible - ECB boss Jean-Claude Trichet just welcomed us all to a great big fat fiasco, no less mesmerising than a tacky reality show, but of considerably greater import.