Revolutions and the price of bread: 1848 and now 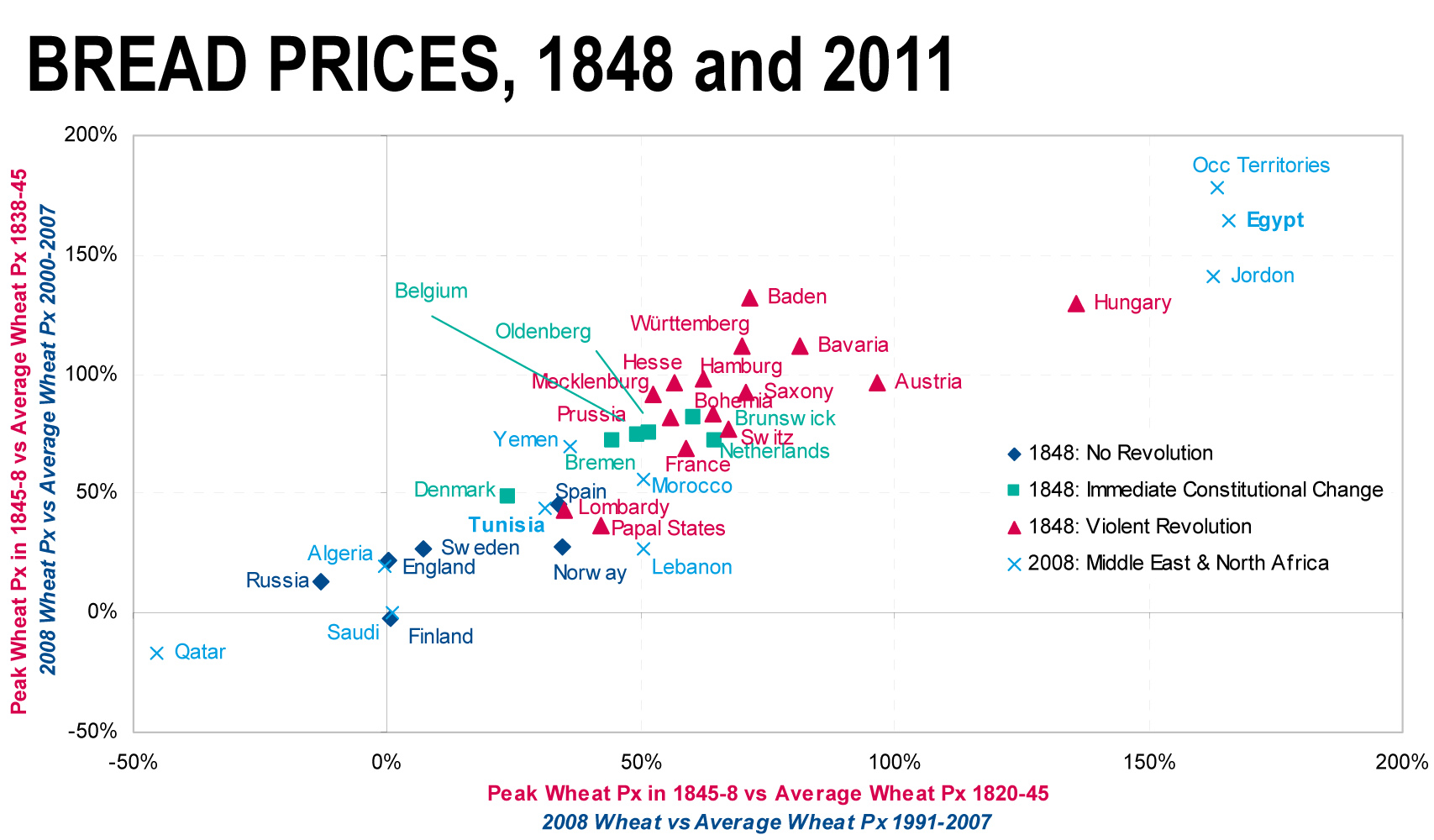 Sometimes one graph says it all. Here's one that says quite a lot. In the graph above the little blue crosses indicate the price of wheat in certain countries that have experienced social unrest this year. The further to the top right the cross is, the higher the medium and short term price hike the country has suffered: for wheat and therefore for bread.

Saudi and Algeria are stable, Occupied Palestine, Jordan and Egypt are on the high end of the price spike; Tunisia, Yemen, Morocco and Lebanon significantly high. There is, therefore, a rough - but only - rough correlation between bread prices and revolutions. So far.

However the big splodge of colour in the middle concerns a completely different period in history: the revolutionary wave of 1848. In 2000 economists Helge Berger and Mark Spoerer calculated the scale of bread price inflation in key locations of the revolutionary wave in the era of Marx and Metternich.* Economists at Barings have used that data to produce the chart above, and it makes pretty stunning viewing.

England, famous for the massive damp-squib Chartist demonstration on Kennington Common, and not much else in 1848 apart from some high-spirited Marseillaise singing in Soho, sits where Saudi sits now: almost no food price inflation. The green squares show places which achieved something similar to what's been happening in the Middle East - immediate constitutional reform on the edge of an insurgent's pitchfork.

There's a lot to be written about this, and nobody would be crazy enough to say food prices were in any way a sole causal factor of 1848 or the revolutions today: but they are clearly contributory factors.

The interesting thing, of course, is that neither the food price spike nor the revolutionary wave has yet subsided in the developing world, so the blue cross part of the graph has to be seen as highly interim. As the Barings guys write:

"There were, undoubtedly, deeper seated causes to the Jasmine Wave than the price of a loaf of bread. But to paraphrase Berger and Spoerer's investigation into the economic causes of the revolutions that rocked Europe in 1848, while food inflation does not provide the brains, it does supply the brawn."**