Alien 2010: will this toxic spillage burn through the Euro? 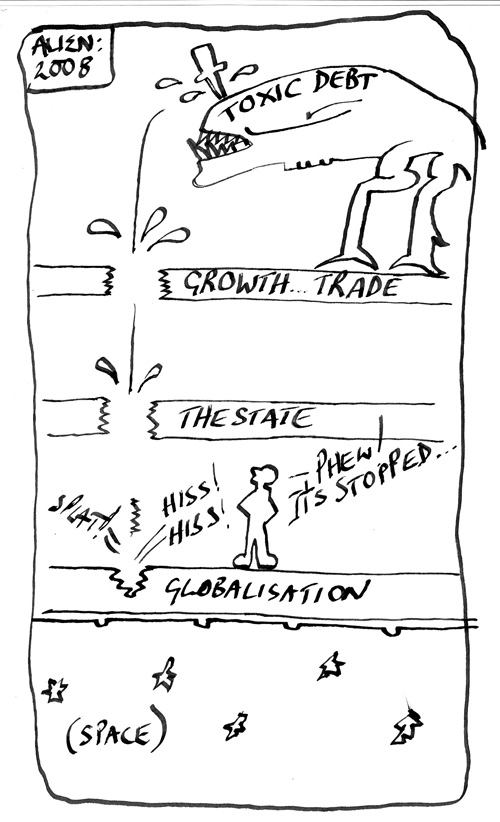 In the original Alien movie (1979) there is a scene that illustrates the problem we've been facing since September 2008, and which is coming to a head now (I've produced a handy graphic opposite).

Somebody stabs the alien: but its blood is acid. It burns through the floor of one deck and one character realises: "that cr*p's gonna burn through the hull!"

They run to the next floor, but it's already burning through to the next deck. Finally it stops: the acidic properties neutralised through interaction with the metal decks, the air, the demands of Hollywood storytelling.

In the global financial crisis the acid is toxic debt. The first thing it hits is the real economy: output, trade and the stock markets, which tank in the last two months of 2008 at the same rate as during the post-1929 crash. The acid quickly burns through here.

But then it hits a much stronger barrier: the state. From the April 2009 London G20 to the Pittsburgh G20 six months later the state holds. Fiscal stimulus, monetary stimulus, stealth bank nationalisations - and above all global solidarity all work to stop the destructive power of this toxic liquid. The world economy stabilises and even begins to recover.

But the state is not uniformly resilient: everything that is not well constructed begins to get burned again. Bipartisan politics in the USA does not survive; nor does British social democracy; and the Euro begins to disintegrate. The weakest parts of the state could not take the strain and begin to fragment.

The next floor down is globalisation: and in the trade and currency wars of mid-2010 you begin to see the first deadly drips of acid begin to smoulder there as well, testing the multi-lateral defence mechanisms of the WTO, IMF, Asian dollar pegs.

One problem with this analogy is, going back to the movie, we never know why the alien's blood stops burning. Is it the strength of the final floor or the burnout of the blood's acidic properties? (Acids after all work by giving off protons to the materials they dissolve, and each molecule has only so much burn.)

But with toxic debt you have a substance more volatile than alien acid blood - because toxic debt can get more toxic during the burning process, because by destroying growth and promoting deflation it can make bad debts worse.

So Ireland's banks realised in 2008 they were sitting on massive toxic debts; but the toxicity got worse because a) deflation and austerity collapsed the value of the property that had been bought with the loans and b) the banks standing behind the loans began to go bust. Now the state (Eire) standing behind both the loans and the real economy has begun to crack under the strain. And finally the superstate that is supposed to stand behind Eire (the ECB and IMF backed EFSF) is so weakened that it has to call on its members to double its resources in the face of the crisis - which it is reportedly doing this afternoon (see WSJ ticker).

Bad debts and toxic debts are, really, stored up stupidity: dead decisions that can never be revisited but must now be paid for. Once the toxicity is unleashed it may be an unsolveable problem: we're not used to these in the modern world, shaped as our thinking has become by the plotlines of Hollywood movies, where there is always a solution, a hero (or heroine) and the baddie gets blasted out into space during Act V.

Or, worse still, it may be a problem that you could have solved if you had acted earlier. That is, if they had let Greece go out of the Eurozone in May, or decisively bailed it out in late February.

Right now, with interest rates rising on the sovereign debts of Spain, Portugal and Belgium, and on the eve of a more or less total nationalisation of the Irish banking system, it is becoming possible to believe that the Euro governments' failure to decisively stem the 2008 banking crisis - to rely on temporary liquidity in the hope that returning growth would sort the problem out, to carry out "stress tests" which failed to test for the one thing they are now facing - that all this may have put the unity of the Eurozone in jeopardy.

The fact that we are not in the middle of a rapid contagion event, but rather a slow one, with critical moments ahead for Ireland, Portugal and the ECB, makes this crisis different to the week of chaos after Lehman, or the days of panic in May 2010 over Greece.

One mitigating factor is the German recovery, which is real; and the launch of US QE2, which has already begun to depress the cost of borrowing in the USA; also the strength of the Asian economic rebound. What people in the markets are waiting for is a decisive act of leadership from Germany.

When I explored the issue of a potential two-tier Eurozone on Newsnight, Tuesday, it was in the knowledge that, by the end of the week it would be the "de nos jours" idea going round the City.

It is certainly being contemplated in Berlin. Contemplated and dismissed: you can never break the Eurozone, Bundesbank boss Alex Weber warned the bond vigilantes last night. But on credit ratings, bond spreads, CDS and many other measures the Eurozone is already two completely different blocs, with different dynamics.