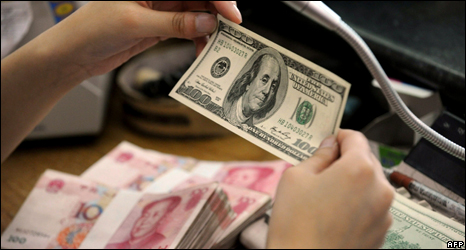 It's been a bad week to be inside the Zhongnanhai, the walled compound in Beijing that is Communist Party HQ.

Amid the Ming-era landscape of lakes and pagodas the ruling elite have been forced to watch jailed dissident Liu Xiaobo awarded the Nobel prize; then a letter signed by 23 party elders was released to the press, calling for an end to censorship, the end of internet spying and a no-taboos discussion of party history.

Then the Chinese basketball team staged a mass brawl with the Brazilians, live on TV, getting themselves a month's suspension.

And later on Friday it could get a little bit worse than that. The US Treasury is set to release its twice yearly report on exchange rates, and there is a chance it will finally get around to formally accusing China of currency manipulation. If it does that, it will give the US the right to invoke bi-lateral trade sanctions against China.

While traditionally the US Treasury avoids using the term, this is election year and while in the US I heard nothing but spleen vented against China, from sources as diverse as the Tea Party movement and the United Steelworkers union.

Whether the formal move happens today or not, China is in the sights of US policymakers, and currency war is - in any case - already at the mobilisation stage.

The US has finally managed to do what the Bank of England did for two years - talk down the dollar. The graph on the front page of today's Financial Times shows its progress, slicing 10 points off a trade weighted index since January.

Meanwhile Japan is busy trying to devalue the Yen. And poor old Europe, which thought it could offset the impact of fiscal austerity with Euro devaluation, has seen the Euro soar instead, with Goldman Sachs predicting a further 4.7% fall of the dollar this year and a 4% rise in the value of the Euro.

Just to be clear - if the value of your currency rises in a situation like this, it is bad, because it means your exports get dearer. With the public sector in retreat across Europe, and calls for the private and export sectors to take the strain, a rising currency makes this impossible.

Conversely if you can talk, trade or bully your currency in a downwards direction, you can effectively export unemployment somewhere else.

This is the great lesson Ben Bernanke taught the world about the Great Depression - the Hoover administration's attachment to the dollar-gold peg undermined all its domestic stimulus efforts. Those who devalued first recovered first.

Today the US needs to devalue against China above all - but cannot because China maintains a currency peg to the dollar, allowing for only mild appreciation over time.

So where next? Well World Trade Organisation Director-General Pascal Lamy in Friday's Guardian warns of actual trade war; and we find the Germans circulating a document accusing China of dumping practices in Eastern Europe, where its companies are winning lucrative contracts.

What we are seeing is the metaphorical rolling stock being assembled and the military bands polishing their instruments.

China feels beleaguered. America feels beleaguered. Both have political dysfunctions in that the US population believes it is state intervention that is causing the crisis and will resist any further stimulus, Meanwhile China cannot allow either a free labour market, free trade, free currency exchange nor free speech because each of these threatens the ability of its communist elite to spend their days in quiet contemplation by the central lake inside the Zhongnanhai.

How beleaguered they feel can be read in the subtext of this article from the People's Daily today (The Endless Ideological Wars Against China):

"The West will continue to target China in its ideological war. It seems the Western way has to be the only way and people around the globe should adopt the Western attitudes. In the minds of some Westerners, even if China grows and develops to an advanced level, it still needs to surrender to Western ideologically."

"China has adopted much Western wisdom since its opening-up. But it refuses to be westernized. The rejuvenation of the Chinese civilization is its dream. The more China learns from the West, the more confident it becomes in its own culture."

The article draws a clear line between China's determination to avoid democracy and to defend its economic place in the world.

In 1915, at a time China seemed trapped, culturally, amid the wreckage of the Qing Dynasty and equally determined not to become westernised, the great Chinese novelist Lu Xun warned the young idealists who would go on to form the Communist Party:

"Imagine an iron house without windows, absolutely indestructible, with many people fast asleep inside who will soon die of suffocation. But you know since they will die in their sleep, they will not feel the pain of death. Now if you cry aloud to wake a few of the lighter sleepers, making those unfortunate few suffer the agony of irrevocable death, do you think you are doing them a good turn?"

Shaking things up could only do harm, was the message. But Lu concluded:

"In spite of my own conviction, I could not blot out hope, for hope lies in the future."

China's leaders are issuing, in these recent comment articles, the same warning as Lu Xun: don't shake things up because our rule is as permanent as Lu Xun's iron house. Waking the sleepers can only cause unnecessary suffering. It is a warning directed at the West, at dissidents like Liu Xiabo, and at the 23 party veterans.

If a currency war breaks out for real, it will shake up a lot more than the forex market.