The Gospel according to Glenn Beck: Tea Party must tread carefully 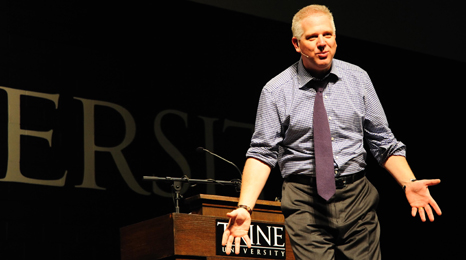 Once Glenn Beck starts speaking the language becomes restrained, moderate, not even a hint of euphemism or innuendo, indeed an insistence that the audience must reach out and persuade their political enemies, not hate them. But the warm up is a different matter.

A local pastor kicks off the proceedings. Beck - and the other speakers - he claims, "will be speaking for God": a claim Beck is not around to hear and will later contradict. Not only this, but Beck and others are the target of unspecified people who would like to kill them, the pastor insists: hence, we the audience must pray for their safety.

Next the compere, who says that America is under siege from more than just al-Qaeda:

"Today we're not only being attacked by terrorists but by those who believe in different principles: our children are being indoctrinated with liberal views on a daily basis."

And consider this, from an Iraq-style deck of "wanted cards" on sale in the sparsely populated exhibition space: a picture of Barack Obama, framed with the legend:

"Trust me. I am not a Kenyan born, lying, arrogant Muslim communist that hates America - really I'm not: Barack Hussein Obama, President USA, Socialist/Communist . The Ultimate Race Card. Done in 2102," complete with the caveat: "This is not a quotation of this person merely a funny anecdotal statement."

The warm up for Beck is Republican Congressional candidate Jackie Walorsky. She declares ideological war on the "progressives" and warns she will vote for a law to assert "states' sovereignty" against the Federal government, should she beat her Democratic opponent.

This is the Tea Party movement in full swing, three weeks after its march on Washington. It is clearly at a political crossroads: its leaders trying to channel it onto the battlefield of mainstream electoral politics and media spin, its members still minded towards the political equivalent of asymmetric warfare with the establishment.

At his Washington rally Beck had mixed political oratory with lengthy meditations on the greatness of George Washington, the power of religious belief. Afterwards he is said to have been self critical, and vowed to focus much more on the religious message alone.

In Angola, Indiana - in a less than full sports hall at a local university - this is what he did.

Beck spoke for one hour thirty minutes, to an audience of about 2,000 paying up to $125 (£80) a seat. Having been whipped up by the previous speakers, and videos eliding images of D-Day with 9/11 and Fallujah, they were now whipped down by Glenn Beck.

His website, TheBlaze.com had already warned followers to desist from wearing historical costumes and toting self-scrawled banners open to the accusation of bigotry. So the crowd were mainly wearing Beck t-shirts ($15) and, some, beatific smiles.

Here's the summary of Beck's speech: Miracles are coming (he means this literally not metaphorically). We've achieved a lot by putting Tea Party candidates in the front seat for 2 November but now we have to go further and stop haranguing our opponents, also looking crazy on the streets. America's problems started in 1915 (ish) with Teddy Roosevelt and Woodrow Wilson, who attempted to DESTROY (Beck writes in in capitals on a whiteboard) Americans' "faith, history and Constitution". George Washington was the greatest human being ever, after Jesus Christ. A number of anecdotes are recounted from Washington's life, of questionable relevance to the matter under discussion. Whenever Beck discusses Washington he bursts into tears, which he always manages to quickly stem by returning to the theme of bashing the "progressives" and their pernicious doctrine of "social justice".

Beck here is cutting against the instincts of the audience: the only real standing ovation moments come on the two or three occasions when he lets fly the rhetoric of "take our country back from the progressives and communists" variety. For the most part he is not only trying to damp the enthusiasm but also confront the almost totally white, over-45, Christian, small-town audience with the limitations of their current strategy. He also insists, tellingly, that they should "love their enemies not hate them" and that they should not claim to speak on God's behalf but understand that God speaks on theirs.

For this reason the audience is for the most part subdued. Remembering this is America, where a 30 second TV commercial is considered long, this feeling of ennui grows towards the end of the 90 minutes Beck is onstage. There are looks of puzzlement. But the seasoned political operators in the audience are not puzzled.

Coming in the same week Sarah Palin called for "unity" in the Republican Party, the depoliticisation of Glenn Beck's rallies, together with his move against the Tea Party's street image, signals the intent to harness the movement within the confines of mainstream party politics.

In urging a return to charity, and sacrifice, Beck is not slow to give this a sharp political edge as well. He warns his followers: "You may have to give up your pension plan, your social security, so that the next generation is not burdened with debt."

Half a mile away in fact, in the "protest area" designated by the police, about 20 local opponents of Glenn Beck held placards saying "Hate is not an American value".

But there was no hate in the speech I heard. And there was very little politics. In the process of becoming the figurehead for the American right, Beck has found new depths within his own personality and "got religion" even more than he had it before. The ideological heavy lifting is being done by the warm-up speakers and by the paraphernalia vendors.

This time he told the story of Washington's attempt to head-off a military coup against Congress: "Gentlemen, you will permit me to put on my spectacles, for I have not only grown gray, but almost blind, in the service of my country". Then burst into tears.

If Glenn Beck were on the psychiatrists' couch, not a platform in front of a paying audience, the analyst might ask why his thoughts and emotions seem to come spontaneously round to Washington again and again ("I see him in my mind's eye," says Beck, and looks at a space in front of him as if, indeed, the man in the wig and stockings could soon appear there).

Could it be that Beck believes he himself is destined to play a similar role? He insists not.

Decoded, this is what I think he is trying to communicate. We've come a long way: changed the game; become power-brokers in the Republican Party - but we have to become less extreme, look less unusual, reach out and make alliances with the non-devout right and conservative Democrats. And in the process of doing this we've got to drive hatred and extremism out of our speech. And we need a powerful and selfless leader to enact a second American revolution that breaks free of Wall Street, social justice, "progressives" and go back to the Constitution of 1776.

Beck says repeatedly that the "liberal media" does not understand the Tea Party movement: darkness cannot comprehend light, as he puts it. I think this has been true up to now - the mainstream US media constantly under-estimates the momentum behind the grassroots right.

But in choosing to become an essentially religious moralist on his public speaking tour, rather than letting fly with both barrels at the politicians as he does on TV, Beck becomes easier to categorise - because there are a lot of other TV evangelists with similar views on social morality and economics. Take away the wit and barb, the unashamed populist rhetoric that made him a TV superstar, and he is in a crowded market.

I joined the line to shake his hand, afterwards, as a way to get a question to him on camera (he's not doing any interviews).

Does he want to be the leader of this movement?

No, was the gist of the answer.

"I am a reminder," he insisted.

My reports on the failure of the fiscal stimulus, the growing poverty in America and the radicalisation of US politics will be shown on Newsnight in October.