Greece: Strife, austerity, end of a dream. What next? 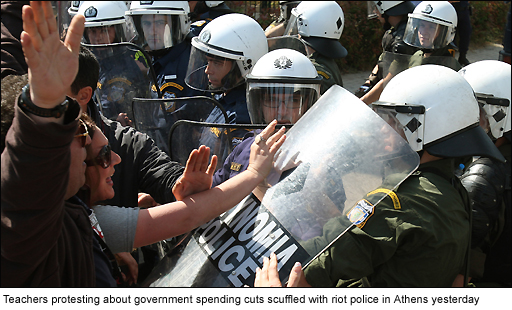 Let me be brutally "macro" and put it as clearly as it demands. The Greek crisis is not over, but its shape has changed. Its implications are bigger and more serious than when it started.

For most of 2010 the issue was whether the Eurozone would bail Greece out. Then last week, absent a bailout, the issue was whether contagion would take down Portugal and Spain. Now, in light of the EU-IMF led deal the markets are taking a long hard look and raising three strategic doubts.

First let's look at the shape of the Greek bailout. Greece has to cut its budget deficit from 13.6% of GDP to 3% by 2014. Of this more than half the tightening will come from spending cuts, and about 4 percentage points from higher taxes.

The bailout is much more comprehensive than the one originally agreed upon by the Eurozone finance ministers: Greece gets two extra years to sort itself out; its banks get access to the European Central Bank on terms that break all the rules: but the impact on the Greek economy is much tougher.

We will never know whether the Papandreou government's original hopes for of a rapid return to growth were right. We do know it is impossible now. The net impact of this austerity package will be to take 8% out of Greek GDP.

Over and above the impact on people's pensions, wages, shopping bills (see what 23% VAT feels like when you hit the tavernas this summer) - the macro impact is simple: this is a deep recession imposed on Greece from Brussels and Washington.

Will the Greek people bear it? To the Anglo-Saxon commentariat the sight of trade unions with communist flags launching organised assaults on lines of riot shields are a bit of a mindbender. But it is not this that I would worry about.

When I spoke to the communist-led stevedores at Piraeus in March it was clear they're not the kind of people who would lead, spark or desire a chaotic social explosion. They are family men with a strong sense of community, nation and solidarity. They've been poor before, they've been on strike many times. Like Unite the union they have their fixers and lines into government.

What you have to worry about - and here Greece is just the point of the wedge in the global crisis - are the cappuccino generation.

It was to avoid having to repossess mobile phones out of the hands of the young, to replace the queue at the Starbucks counter with the dole queue, that the world's politicians bailed out the banks. Not a single mainstream politician was prepared to confront the possibility of market forces being unleashed in the form of bank failure and consumer slump.

The young have been, by force of the macroeconomic model adopted over the last 20 years, pushed into a lifestyle of early debt, fast fashion, low prospects. I saw the lifestyle of social solidarity and sterilised milk removed from people of my parents' generation in the 1980s and it was traumatic. But the new lifestyle - the globalised, consumerised debt-driven lifestyle - was supposed to replace this: it was supposed to be the solution.

For people under 35 I think losing the cappuccino lifestyle may be even more traumatic than it was for miners to lose the coal mines. To be told you will never have a job with a decent pension; you will be poorer than your parents - we don't know how this will impact.

And in Greece there is a whole generation of young people already very unhappy. Higher education is poor in Greece; corrupt societies - and Greece is by the admission of its own government riddled with low-level corruption - tend to dis-benefit the young, because they have no power.

So the question of will Greek people stomach this devolves onto the young. Those I've interviewed - and this unites left and right in politics - are carrying around a sense of betrayal. And that's before a single cut's been made.

Next question is: what happens to growth? Greece will now enter a prolonged and deep recession driven not by economic accident but by policy. And here again Greece is a warning to the world. The danger of a public-sector driven double dip in southern Europe is what's haunting the markets.

But that only begs the bigger questions: what happens to the USA when its fiscal stimulus runs out - and when fiscal reality begins to hit individual US states who are, by law, required to balance their books? Right now the US recovery is, whatever the figures say, fragile. House prices could go into a double dip on their own, without the help of a public-sector recession. But in a year's time the USA will have to end the stimulus.

Likewise the monetary stimulus: it's been massive, both in Britain and the USA. Money printing on an unprecendented scale; interest rates at 400 year lows. What happens when this has to be tightened?

Greece spooks the markets because it reminds them that, despite the soaraway profits and bonuses at the investment banks, we could go into a global double-dip recession - and if we do, there are no bullets left in the clip in terms of saving the banks.

Finally, the Eurozone. The Eurozone has proved spectacularly that it doesn't work. Its rules are shot: the no bailout rule; the no-IMF involvement presumption; also the quality control over collateral at the ECB is a dead letter.

But there is more: only the intervention of the IMF, and the quite sterling professionalism of the Greek government - which drove a hard bargain but did not succumb to demagogy - made this deal happen. Left to the European Commission, Angela Merkel et al it was a mess. Europe's leadership has been judged unimpressive by the ultimate voting machine, the markets.

But harder choices lie ahead. Either the Eurozone can tolerate debt defaults or it cannot. Either it creates a bailout fund or it relies on the IMF. We still do not know the answers. Realistically the answers will come from the electorate of Germany and France over the next couple of years - but there is a clear danger of the Eurozone arrangements becoming dysfuncitional.

Finally, another macro lesson is being missed as we all focus on the UK election.

Europe looks like the weak link in the global system.

Sure China's bubble is about to burst again; sure, Obama has to exit the stimulus sometime. But Europe is where phase two of the crisis ended first. And phase two of the crisis was, essentially, fiscal and monetary stimulus to keep the cappuccino generation off the dole queue. It's over in Greece, Ireland, Portugal - and it will soon be over elsewhere in Europe.

If there is one place in the world where the impact of imposed austerity is unpredictable it is Europe, for all the reasons history tells us.