"All items of value have been removed," reads the sign on the boarded-up Flag and Whistle pub, the first thing you see when you leave Margate railway station.

For large parts of Britain the phrase sums up the state of things.

I have been on the road for the best part of two weeks trying to look beyond the financial crisis at the structural problems affecting the real economy - travelling from Margate in south-east England to St David's in west Wales - and back.

Along the way I have been asking people - what is wrong with Britain and how do we fix it?

When I first asked the question, on a wind-whipped Margate seafront, the answer was blunt: "Foreigners mate. Take our jobs, undercut our wages."

One person after another told the same story - they cannot get a job and believe migrant workers are undercutting their wages.

This may shock you, but it does not shock me - I have been hearing this message for two or three years now. It is the signature tune of the recession - and one politicians do not really want to hear. 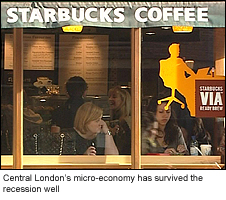 But to me it is evidence of a deeper problem. Social mobility has declined, industry has shrunk from 20% of GDP to 13% under the present government.

Social historian Michael Collins, who has studied the working class diaspora of the South East, tells me that large sections of the population now reject the officially prescribed route upwards - education - in favour of a more tangible one: cash.

Low social mobility and this deep alienation of a section of unskilled manual workers has created a cultural divide in Britain that would have shocked Orwell and Disraeli, between an urban, metropolitan and multi-ethnic working culture in the cities and the one you find on Margate seafront.

It was all too obvious as I hit London that it is there that the power and wealth in society rests.

In central London - and central Birmingham, Manchester and Glasgow to an extent - you have got a self-sufficient micro-economy whose badge of membership is the cappuccino and the laptop.

It has survived the recession well - the Starbucks barista buys their lunch in Subway, buys a cheap top in Zara, lives in the modern version of a rooming house, which is a £500k rented London terrace divided into only bedrooms.

The wages are never brilliant, and nobody plans to do this forever, but there is a supercool aspect to the lifestyle that is a world away from life in a small town.

"We've centralised the economy," conservative philosopher Philip Blond told me. "We've taken all the wealth, talent, capital and centralised it inside the M25. And the state underwrites the finance system - so it rewards speculation. Why would capital go anywhere else?"

The results are obvious once you get to a place like Stoke-on-Trent. Most of what Stoke was famous for had already gone by the time the financial crisis hit.

Viewed from the air the city is scarred with demolition sites of the great names of ceramics and steel. What is new are warehouses and cut-price stores - Aldi, B&Q, cheap sofa stores.

On a projection that includes government spending cuts, the workforce does not stop shrinking until 2017.

The urban landscape of Hanley, a place to which I have returned throughout this recession, is a living demonstration of the failure of an economic model.

There are more than enough pawnbrokers and cheque cashing stores, some temp agencies, with very meagre offers in the window. And at night, silence - save for the trashy student bars where, say the posters, you can get "trollied" for 99p. 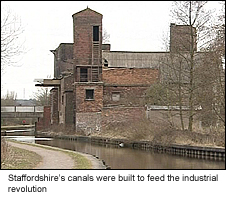 Something about the economic model we adopted over the last 20 years has just not worked.

Financial speculation has been rewarded, industry has declined, wages at the bottom end have not kept pace with growth and the basic test of an economy - does it make poor people richer - has been flunked.

What is the answer? For me, the urban landscape of Stoke contains a buried clue. Slicing through the five pottery towns are the canals, flanked by the picturesque ruins of the early kilns that made the names Wedgwood, Spode and Doulton famous.

In the 1770s canals were like the internet - a revolutionary new communications network that made new consumer products like a Staffordshire tea service possible for the masses.

Stoke exists because three or four entrepreneurs said: "A new age is coming, let's be part of it, in fact let's do it first."

For 20 years we thought we were already in a new age - that it was the age of high finance and call centres. Then the banks collapsed.

In St David's, Britain's smallest city, one thing strikes you - there is no big business.

Once a backwater, Pembrokeshire is now home to a booming seasonal micro-economy of eco-tourism, alternative technology, crafts and organic farming.

It is a kind of middle class nirvana, kept out of the hands of the property wide-boys and lookalike retail chains by the fact that it is inside a National Park.

I went there because I had uncovered a network of local businesses operating in ways that might hold clues to Britain's future. 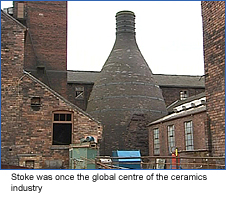 "We're one of the oldest industrial countries," adventure company boss and deep green business guru Andy Middleton told me, "but we could become the first successful post-industrial economy".

I sat round the table with Andy and his mates - the T-shirt boss, the tepee camp owner, the recycleable furniture designer whose company turns over £30m a year, and Andy himself whose adventure company morphed into a business consultancy.

"Nothing in nature maximises," Andy told me. "Trees don't ask 'how high can I grow?'"

"If you maximise profit" Chris, former MD of local sportswear group Howies, said, "you've no room for manouver. It's a recipe for boom and bust".

It is clear to me there are two big things happening in the world:

A tech revolution that started with the internet, but has now spread to everything from materials science to medicine to robotics;

and a green revolution, that started with carbon reduction and is now changing the way people run businesses and live their lives.

This west Wales cluster of eco-business, who do not want to be part of the city-financed world, and want a bottom line that includes people and planet as well as profit, represent one way forward - but not without some bigger structural changes.

As I retrace my steps (the return journey is featured on Tuesday's Newsnight) I find the beginnings of a more sustainable kind of economy - at Emma Bridgewater's booming family-owned pottery in Stoke, at a London dotcom where they have invented an alternative to banking, and in Margate, with artist Tracey Emin, who believes the new art gallery soon to open there will transform the place.

And I meet the people trying to heal the fractiousness and mistrust of migrant workers through the ingenious means of getting them paid decent wages so the jobs and livelihoods of the existing workforce cannot be undercut.

"We're weaving the social fabric of this country," says the woman standing in the rain on London's Oxford Street, fighting to get cleaners paid above the minimum wage. The irony is not lost on me that she is Polish.

All the power has been centred on finance and the financial model and, funnily enough, we have just hocked our entire economy to save that broken system.

From the coasteering teams in Wales to the boxing clubs of the potteries I sense a deep frustration with this absence of voice and power that traditional politics just does not capture.

But don't just take it from me - join me on Newsnight, Monday 29 March and Tuesday 30 March, to hear it from the brickies, bantamweights, emigrant plasterers, immigrant cleaners, seaweed enthusiasts, pottery painters, city refuseniks and Brit-art geniuses.

Hear their answer to "What's wrong with Britain and how do we fix it?" - and hit the comments button to give us yours.