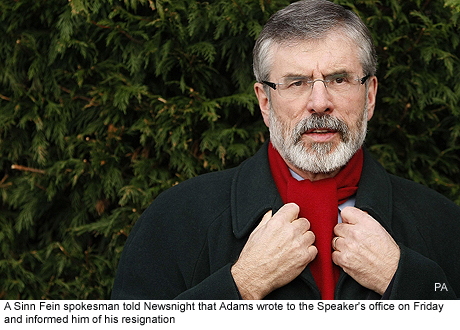 I wrote here a few weeks ago that if Adams planned to stand down as a Westminster MP, in order to stand for the Irish Parliament, he would have to go through the usual rigmarole whereby a resigning MP applies for an office of profit under the Crown - the British Crown.

All rather embarrassing for the world's leading Irish Republican.

A resolution of the House of Commons from almost 400 years ago - March 1624 - says an MP cannot directly resign their seat except by death, disqualification or expulsion.

A House of Commons factsheet states: "A Member wishing to resign has to go through the process of applying for a paid office of the Crown... There are two such offices - Crown Steward and Bailiff of the Chiltern Hundreds, and of the Manor of Northstead."

And it's the Chancellor of the Exchequer who grants them the job.

The Treasury this afternoon were quite cagey. They confirmed that no application had been received and stressed that the Chancellor's role is entirely ceremonial.

A Sinn Fein spokesman told Newsnight that Adams "wrote to the Speaker's office on Friday and informed him of his resignation. It's a non-issue from our perspective. He submitted his resignation and that's it. He's stepped down from that position. He certainly didn't apply for the Stewardship of the Manor of Northstead."

It seems Mr Adams has found some way of resigning from Parliament without going through these ancient procedures.

And the British Constitution has been changed for ever.

It's all governed by the Parliamentary bible Erskine May, it seems, and the following section:

"It is a settled principle of parliamentary law that a Member, after he is duly chosen, cannot relinquish his seat; and, in order to evade this restriction, a Member who wishes to retire accepts office under the Crown, which legally vacates his seat and obliges the House to order a new writ."

So in British law, Gerry Adams is still an MP, whether he wants to be or not. Until he applies for one of the two stewardships.

I was also advised that one way Adams might get round this without expressing allegiance to the British Crown in any form would be to turn up at the House of Commons and try to sit in the Chamber.

He would then be automatically disqualified from the House on the grounds that he hasn't sworn the oath, and a writ would then be moved for a by-election in West Belfast.

"The seat is vacated as if they were dead," I'm told.

And what a drama it would be if Adams were to do that, and be ejected from the Commons.

If Adams was elected to the Irish Parliament it would be no problem in British law for him to serve as an MP for the Irish and British Parliaments simultaneously. That was allowed by the Disqualifications Act passed in 2000.

The Speaker's office have been in touch: Gerry Adams remains a Member of Parliament unless or until he applies to the Chancellor for an office of profit under the Crown.

I'm Michael Crick, and I'm Newsnight's political editor. My guiding rule is that in any story there's usually something the politicians would prefer the world not to know. My job is to find that out. Follow me on Twitter

You can stay up to date with Newsnight: Michael Crick via these feeds.