How to win a by-election and still lose your deposit

This by-election must be the most bizarre that I will ever cover. Twenty-six candidates, an all-time record, which is especially remarkable given that neither Labour, the Lib Dems, UKIP nor the BNP are putting anybody up. Mathematically, it's actually possible to win this by-election and still lose your deposit - that would require a pretty even spread of votes as to save your deposit you need more than five per cent. 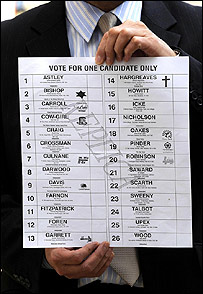 There's also been talk of a record low turnout - the previous record was just 19 per cent when Hillary Benn won the Leeds Central by-election in 1999 (I think it was). However, talking to voters on the street of Cottingham today, I was struck by just how many people said they would definitely vote tomorrow or would probably do so, which rather suggests that the Leeds Central record is likely to last a bit longer yet. And it was pretty clear from what people were telling me that David Davis will emerge victorious tomorrow.

When I turned up this morning I had a mischievous thought that we could track down all of Davis's 25 rival candidates, film them, and leave Davis out of the piece altogether - and then afterwards get Jeremy to say "you'll find a list of the other candidate on our website". However, my editor at Newsnight wasn't too keen on the idea, but when I mentioned it to David Davis this afternoon he thought it was a hilarious suggestion and assured me he would never have complained.

Instead I've spent the day tracking down and interviewing as many contenders here as I could find. And I hereby claim the all-time British broadcasting record for the number of candidates interviewed in one day in one parliamentary constituency - a magnificent 13. These include Miss Great Britain Gemma Garrett, and David Bishop of the Church of Militant Elvis. The former Newsnight presenter David Icke, however, was surprisingly camera shy. He told me he thought I would, in his words "take the piss". Goodness gracious, I wonder what gave him that idea.

I'm Michael Crick, and I'm Newsnight's political editor. My guiding rule is that in any story there's usually something the politicians would prefer the world not to know. My job is to find that out. Follow me on Twitter

You can stay up to date with Newsnight: Michael Crick via these feeds.