The tangled reality of US/Pakistan relations 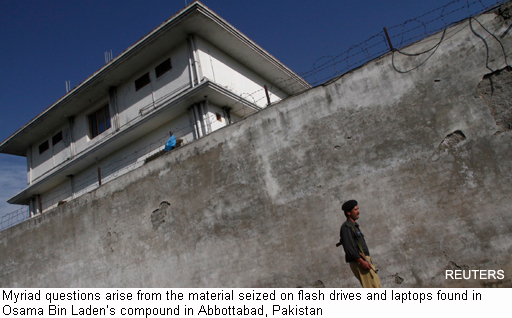 WASHINGTON - The current crisis in US/Pakistan relations is not the first - but it is the most difficult one since 9/11, and it could easily be aggravated further by the intelligence arising from the raid on Osama Bin Laden's compound.

For this reason, Washington insiders are not so sure that diplomatic moves to ease the problem will succeed.

Senator John Kerry has just been in Islamabad asking for "action not words" from the Pakistani authorities. He says he has gained some agreement for practical steps but, apart from gaining the return of remnants of the US helicopter that was destroyed at the compound, has not yet specified what these might be.

This morning he and other members of the US Senate Committee on Foreign Relations will be holding hearings on Pakistan, including the question of how the billions given in aid could be used more effectively to buy the kind of counter terrorist cooperation that the Americans are after. 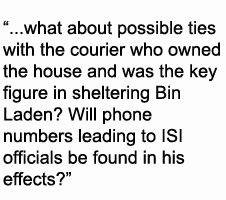 Juan Zarate, counter terrorist adviser to President George W Bush, argues that the kind of benchmarks that congressmen have advocated in the past for linking aid to performance on specific actions against militant groups could prove counter-productive in the short term because the Pakistanis consider this "humiliating".

He poses the further question, "what happens tomorrow if we have to go after Ayman al-Zawahiri?", referring to the former Al Qaeda number two and presumed leader after Bin Laden's death.

The question of what leads are thrown up by the intelligence trove from the raided Abottabad compound is now in itself a key factor in whether Mr Kerry and members of President Barack Obama's administration are able to soothe the relationship. Myriad questions arise from the material seized on flash drives and laptops.

Pakistani officials insist there was no contact between their Inter-Services Intelligence (ISI) and Bin Laden - but what about possible ties with the courier who owned the house and was the key figure in sheltering him?

Will phone numbers leading to ISI officials be found in Bin Laden's effects? Will there be intelligence that allows the CIA to quickly pinpoint Dr al-Zawahiri or other key figures who might now take control of Al Qaeda?

John McLaughlin, deputy director of the CIA until 2004, argues that even in this current difficult moment for US/Pakistan relations, America will reserve the right to act unilaterally against terrorist targets in Pakistan.

He believes though that ties can slowly be re-built with Pakistan, despite the fact that the raid, mounted without their leaders' foreknowledge, gave them their "biggest shock for a generation".

At previous moments of tension between the two countries, accommodations have been found. Intelligence about Al Qaeda suspects has flowed or the army has been sent in to one of the restive tribal areas on the Pakistan border. The US has signed off on new aid payments.

What tends to happen though is that within months, the Americans again accuse the Pakistanis of foot dragging in the fight against militancy, and Islamabad for its part counters with arguments that the US routinely violates its sovereignty.

The tangled reality of the situation is made worse by the fact that Pakistani ministers, mindful of anti-American sentiment in their country, will often not admit publicly to their agreement to drone strikes or other steps. Many people I have spoken to here compare the relationship to a dysfunctional marriage in which both sides need one another but find the reality of daily life increasingly unbearable.

There are those who see ways though in which the two countries might navigate their way through the perfect storm of recrimination and resentment that the Bin Laden operation has produced.

Juan Zarate and some others believe that if the materials seized in the raid produce some nugget of intelligence that leads to the discovery of Dr al-Zawahiri or other key figures, the US may chose to trust the Pakistanis with this knowledge, and make them partners in acting upon it.

If the exploitation of the intelligence went wrong and a leak was suspected the US could use this to place further pressure on Pakistani ministers. But if it all went well, trust might be re-built. The problem is though that there are many within the secret side of US counter terrorism who, because of the way that Osama Bin Laden hid for years where he did, are no longer prepared to take that risk.

Watch Mark Urban's report on the state of US/Pakistan relations on Newsnight on Tuesday 17 May 2011 at 2230 on BBC Two, and then afterwards on the BBC iPlayer.