The political process that is underway in Egypt 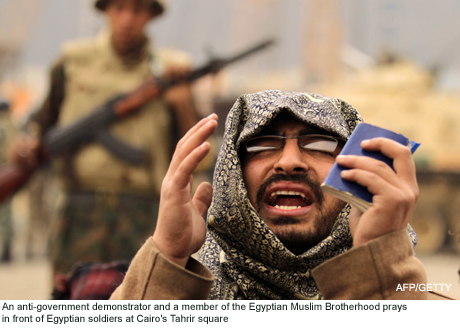 We've got a much better idea in the past couple of days about the political process that is underway in Egypt.

We can also see more clearly how the principal forces in this battle - Egypt's security establishment and the Muslim Brotherhood - are trying to out manoeuvre one another.

The Brotherhood appears to see the current crisis as an important stage in its decades-long struggle against repression and is not aiming for a rapid solution.

Instead it is trying to soothe those who might be alarmed by its rise (the secular and Christians at home; those abroad who fear political Islam) with carefully formulated political messages: the Brotherhood will not put forward a candidate for the presidency in the polls due in September; it will respect all cultures; it will respect Egypt's international treaty obligations.

At the same time, one can infer that the Brotherhood wants to improve its representation in parliament substantially. Candidates affiliated to the Brotherhood did well in 2005, and are likely to do even better in the next elections, particularly if the regime is pressured into allowing a fair campaign.

The security establishment, for its part, is deeply suspicious of the Brotherhood, although it appears ready to allow it greater freedom of action. The old guard, is now personified by vice president General Omar Sulayman, who, the Wikileaks cables show, has frequently warned the US about the dangers presented by the Islamic group.

At the weekend Gen Sulayman held talks with the opposition, including the Brotherhood. This was progress, no doubt, but it is easy to imagine the suspicion with which those around the table regarded each other.

The opposition declared it was unhappy with the outcome of the talks and that demonstrations would continue. The security establishment, for its part was ready to throw some of its members to the wolves, allowing investigations to move ahead on several key officials.

What all of this suggests is that we may now be in for a prolonged period of political manoeuvring. The American envoy, apparently sensing this, surprised many by stating that president Mubarak ought to remain in place until, September to oversee the transition.

The coming weeks or months promise all manner of tough talking about the elections, constitutional changes, and the fate of many leading personalities including President Mubarak himself. Protest and violence will be an intrinsic part of this negotiation.

As the security bosses and the Muslim Brotherhood seek their accommodations, both the president and many of the protesters in Tahrir square may prove expendable.