What China stealth plane response reveals about US

It has been fascinating to see photographs of what is reported to be a new Chinese stealth fighter, the J-20. 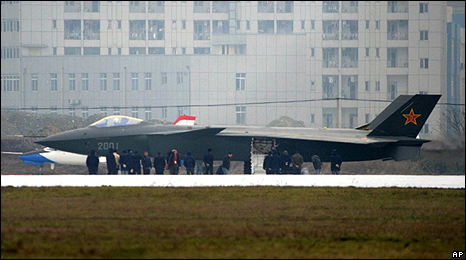 Some US commentators have flagged it up as evidence that China is preparing to challenge American military dominance in the Pacific, and to me the treatment given to the photos overseas says more than the images themselves.

The Wall Street Journal website made the J-20 pictures their lead item a couple of days ago, and the Los Angeles Times has chosen to link the appearance of new Chinese weapons to the US defence secretary, Robert Gates' visit to that country this weekend.

It is all very reminiscent of the atmosphere in the mid-1980s, when grainy images of new Soviet weapons made front page news, and we tried to analyse what difference the new tank or plane would make to the global balance of power.

In the Cold War, releases of new data about Soviet hardware were all part and parcel of the Pentagon spending battle.

The financial implications of addressing some newly identified "capability gap", particularly when it involved ballistic missiles or bombers, could be colossal.

When it comes to the J-20 fighter, there has been some professional debate about whether the pictures depict an early test-bed or a viable technology that is about to enter service.

The US Director of Naval Intelligence this week was sanguine about the development, arguing that China is still several years away from having a production stealth fighter.

While I do not suspect a conspiracy in the appearance of these photos, I do think it is hardly a coincidence that they are receiving such prominent coverage in the same week that Mr Gates has been speaking about a $78bn cut to the Pentagon budget over the next five years.

As the budget battles turn uglier, we can expect more messages along the lines of "just look at what the Chinese are doing".

America's huge defence establishment needs purpose, and it is evident that the counter terrorist mission that provided it after the end of the Cold War and then 9/11 is fading in its potency.

Scares about Chinese military potential are not new - indeed one was touched off when an American plane was forced to land in China shortly after President George W Bush came to power.

In the 10 years since that incident, the al-Qaeda threat has dominated the scene.

Now, the increasingly fraught trading relationship with China is touching deep insecurities in the American psyche.

China's military capability, it is only fair to point out, has advanced markedly in the past decade too, with major spending increases and some impressive technological achievements.

There seems then to be a sort of glacial certainty to the Pentagon's increasing focus on China - a slow but inevitable shifting of horizons towards a new, defining, great power rivalry.

The only way that might stop now is if an even worse threat materialises, from a further 9/11 scale attack to the implosion of a state with nuclear weapons, such as Pakistan.