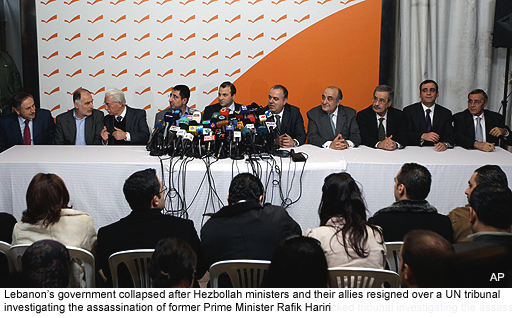 The resignation of Hezbollah (and its principal Christian ally) from the Lebanese government has put the country on the proverbial knife edge.

It also shows how far the search for truth or justice - cherished concepts to people the world over - might lead to truly appalling consequences in this particular place.

The crisis hinges over the United Nations investigation into the assassination nearly six years ago of the then Prime Minister Rafik Hariri. For months the rival factions have been bracing themselves for the results of this long inquiry, because it is widely believed that it will blame Hezbollah for killing the popular Sunni politician by detonating a truck bomb as his motorcade passed.

Hezbollah (literally the Party of God) is a real force to be reckoned with. It has representation in the Lebanese parliament, its own widely watched satellite TV station, champions the roughly one third of the population that is Shia, has a heavily armed and highly expert military force, and is Iran's principal ally in the eastern Mediterranean.

Mr Hariri's son Saad is now Prime Minister, and Hezbollah accuses him of 'mishandling' the investigation, which has been partly funded by Lebanon itself. Saad Hariri's personal position is mind boggling - after all what Hezbollah have done today is to walk out of his government because they are so angry about being accused of the assassination.

Hariri the younger now has to balance the good of the nation, including the avoidance of a possible new civil war, against his desire to see his father's murderers get their comeuppance. It has all the complexity and poignancy of a Shakespearean or Greek tragedy.

Hezbollah argues that the UN investigation has been hijacked by the Israelis who were themselves responsible for the 2005 killing. But since Wissam Eid, a Muslim Lebanese police captain, was responsible for gathering much of the key evidence, and the many Canadians, Belgians, and other sundry nationalities who carried out the investigation can hardly be accused of signing up en masse to an Israeli conspiracy, the Hezbollah line on this is not gaining much traction outside their south Beirut heartland.

Capt Eid was himself assassinated by a car bomb in 2008, and the UN is now investigating whether Hezbollah carried out that hit as well.

Many feel that the UN has dragged its heels on this investigation (started in 2007), and it's easy enough to understand the difficult moral equation of seeking justice for Rafik Hariri and the 21 others who perished with him in the blast, versus the potential of unleashing a civil war that might claim thousands of lives.

The Hague-based tribunal must now forward its dossier to a judge, who could then issue indictments against certain key individuals in the plot a few weeks later. So far, it has not been passed to the judge.

Several senior Hezbollah officials have been named in press reporting as likely candidates for charges relating to the assassination. However some sources close to the UN tribunal suggest that their evidence, a substantial amount of which relates to analysis of mobile phones used by the hit team and its controllers, does not provide the kind of hard evidence that can be used to prosecute individuals.

Whatever the shortcomings of the evidence though it is clear enough from the diplomatic dance we have seen in recent months, that major regional players from Saudi Arabia to Jordan, and Syria, are deeply worried that this crisis will set Lebanese Sunnis on a course for confrontation with the Shia community.

Lebanon's neighbours have sought, as has Prime Minister Saad Hariri himself, to get Iran to exert a moderating influence on Hezbollah.

With today's resignations, Hezbollah has escalated its political campaign against the UN tribunal. Their behaviour suggests they believe not only that the UN will accuse them, but that its charges could be detailed and credible. A new phase of this crisis has started - even if nobody has yet been publicly accused by the UN of murder.