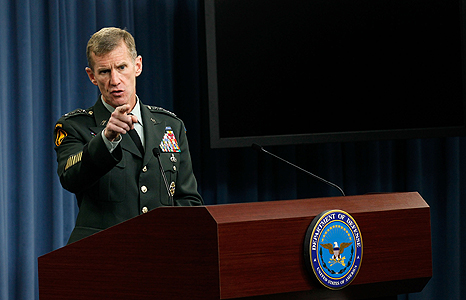 General Stanley McChrystal has been summoned back to Washington for a face-to-face meeting with his Commander in Chief. The cause of this recall, which will be widely seen as a carpeting, is not the rising toll of Nato casualties in Afghanistan or tensions with Afghan leaders, but a profile in Rolling Stone magazine that has angered the White House.

The magazine reports critical remarks - particularly by the general's staff - about the president and other senior members of the Administration. National Security Adviser Gen James Jones is lampooned as 'a clown' by one, Vice President Biden as 'Bite me' by another.

Perhaps the most sensitive passage is one in which one of Gen McChrystal's aides describes a meeting between commander and CinC one year ago: "Obama clearly didn't know anything about [McChrystal], who he was... he didn't seem very engaged. The boss was pretty disappointed."

General and president have had their differences before. Mr Obama admonished McChrystal after a speech in London last October. The president thought his Afghan commander was lobbying too hard and too publicly.

The general himself is not quoted being critical of the president. His gaffes (as opposed to those of his staff) consist of saying - possibly joking - that he couldn't bear to open an e-mail from Af-Pak envoy Richard Holbrooke and a criticism of the US ambassador in Kabul.

McChrystal has apologised for the article, implying that he should never have gone along with it. One of his press aides has resigned.

This spat has echoes of another two years ago when Admiral William Fallon, then head of Central Command, cooperated with a profile for Esquire magazine, and ended up having to quit. The admiral considered that the writer had misrepresented his views about possible military action against Iran but resigned anyway on a point of honour.

If McChrystal is to be criticised it should be for allowing similar access to someone who was bound to quote selectively (as all journalists do...), and for allowing a frat party atmosphere among his staff.

Even if other reporters might not have quoted critical remarks about administration officials verbatim, it is hard to imagine that any honest writer could have ignored the critical comments made by the Kabul headquarters team.

The critical difference between this and the case of Adm Fallon though is that Gen McChrystal has not himself been quoted being critical of the president or his policies. And while criticism of the Commander in Chief is a serious misdemeanour in the American set up, the general cannot fairly be accused of doing that.

So why such a tough reaction from the White House? It is hard to avoid the suspicion that the president would like to keep his commander in Afghanistan on the back foot. The latest carpeting, just like last October's may well be designed to stop McChrystal from becoming too assertive in public about the future direction of Afghan strategy.

These tensions are bound to increase as the president's deadline for starting a withdrawal of US forces (July 2011) approaches. Senior Nato officers have been privately critical of the deadline, arguing that it gives them too little time to demonstrate success, and causes influential Afghans to doubt the future US commitment to their country.

If my suspicions are correct about the motives for summoning his general back to Washington, then it is quite possible that Gen McChrystal will offer his resignation.

He may consider it a point of honour to take responsibility for his staff, or he may just wish to deny his president the psychological leverage he seeks to gain by this recall.

That the two men may go to the brink over such an apparently trivial issue is, however, symptomatic of the increasingly fraught differences over Afghan policy, particularly the president's timetable for withdrawal.