The struggle to maintain a reputation

CAMP BASTION - When I suggested to an old acquaintance from Iraq that Britain might soon seek a less risky role for its troops here I was surprised by the intensity of his response. 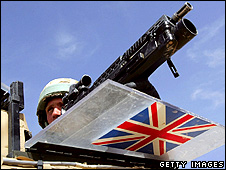 The officer, a middle ranking British type who normally adopts a cheeky grin and humorous banter, shook his head and gritted his teeth.

"We can't walk away from this one," he said, "that would be disastrous for the Army".

Before Britain can sign off in Helmand, he suggested, it will have to create a better outcome than it achieved in Basra in southern Iraq.

What he has in mind is an "end state" in which the current levels of violence have been quenched and the Afghan security forces are able to cope with little foreign help.

For many at the command level in the British Army, this result is essential because failure to achieve it would damage their international reputation.

It might seem foolish or misguided to place the maintenance of your good name as a professional military as one of the key objectives in an operation in which so many lives are being lost or shattered, but it is something that everyone engaged in this campaign understands (even if some might not share this idea).

In an operation where the US is in the lead, and will shortly by the commitment of additional troops, place themselves even more so, few see the overall success of this mission as being Britain's responsibility.

Under these circumstances, keeping up the UK's reputation for military effectiveness does become a national objective.

Increasingly, as national support for the mission wobbles, this language about needing to maintain the country's international standing as a military power is entering the pronouncements of service chiefs.

What about the Poor Bloody Infantry? How do they feel about risking the IEDs and snipers in this cause?

Their language might be different but their national pride burns in an even more forthright manner.

Many a sergeant major or corporal has spent a career running down the armies of fellow Nato countries that they have served alongside.

They do not want British troops to be the butt of jokes or snide comments, as they sometimes were for the Americans in Iraq.

Speaking over the last couple of days to soldiers from 2nd Battalion the Yorkshire Regiment (the Green Howards) about the risks they run in places like Sangin - the IED capital of Britain's patch in Helmand - they appear more than ready to continue the fight.

They do not share the war weariness of many at home - although they do speak frankly about the effectiveness of their enemies here.

Britain though is rapidly reaching the limits of what it can commit to Afghanistan. The troop total is creeping over 10,000 which is entering dangerous territory as far as the Ministry of Defence bean counters are concerned.

Under these circumstances the pattern of this year's operations has been for Britain to leave an increasing amount of this province to the Americans, focussing limited resources on a few key districts.

Here at Camp Bastion, the US side of the base is swelling by the day. The new presidential commitment to send many thousands more troops will accelerate the process of giving them more of the fight.

That's why on this trip I won't be joining British troops in the field but rather the US marines of Task Force Leatherneck.

The marines already control two thirds of Helmand and parts of the neighbouring provinces of Nimruz and Farah.

They are taking on their task with their customary energy and absence of doubt.

So, as the British Army tries to convince its home public that supporting the troops also means supporting their mission, the trend of reducing the area what the UK is responsible for may well continue.

I would not exaggerate this - it is not as if Britain's eventual "success", assuming that is what happens, will be confined to a pacified postage stamp sized areas of Helmand.

It does however mean that if some dramatic turn around is achieved here it will belong (in the eyes of many of those international military spectators that the British officer I mentioned at the start is worrying about) to the United States.