Generals as politicians - lessons from history

General Sir Richard Dannatt's enlistment in the Tory defence team, on the day after he left the Army is an unprecedented event.

It's also one that makes a great many people uncomfortable.

In terms of precedent, or the lack of it, there is a recent one and a historical one, but neither quite matches these circumstances. 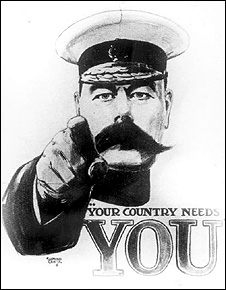 Admiral Sir Alan West, formerly head of the Royal Navy, was appointed by Prime Minister Gordon Brown in 2007 as security minister and elevated to the House of Lords.

Lord West though followed the "decent interval" principle (one year and four months in his case) between leaving the forces and taking up his ministerial post.

It is also true that Lord West's ministerial job is located outside the Ministry of Defence, so does not concern the narrow interests of his former service.

Going further back in time, one has to think back all the way to 1914 and Lord Kitchener's appointment as secretary of war.

He was a field marshal with a distinguished record, who was co-opted into the war cabinet as the nation entered a total war.

He was the architect of the mass mobilisation of three million men (hence the iconic recruiting poster) which arguably allowed Britain to win World War I.

Kitchener achieved great things, although his appointment was resented by a great many politicians.

Loss of a generation

As for his former colleagues, when Gen Sir William Robertson took over as head of the Army one year into the war, he did so only on condition that he, rather than Kitchener would give strategic advice to the Cabinet.

He was also regarded by many as the man who sent an entire generation to its doom - and my late grandfather, a survivor of the Somme, certainly saw Kitchener in those terms.

Serious as the situation in Helmand is though, it's hardly comparable to that moment in 1914 when the lights were going out all over Europe.

During World War I almost one quarter of all the men in Britain ended up serving in the Army - a degree of national mobilisation never equalled before or since (not even in World War II).

In those circumstances, drawing Field Marshal Kitchener into the cabinet was an understandable step - and in accepting his job he made clear he would not play the role of a party politician.

Go further back into history and the examples of Wellington and Marlborough can be given, but the unwritten constitutional rules about separating powers were different then.

At one point in the Napoleonic wars there were more than 70 serving Army officers in the House of Commons, for example.

More importantly, despite their extraordinary success on the battlefield, Marlborough and Wellington were divisive political figures who are still viewed, centuries later, through the prism of party prejudice.

Even today the Tory will argue that Wellington won the Battle of Waterloo, whereas modern day Whigs still insist it was the Prussians who saved the day.

This then is the underlying lesson about the way power is divided in Britain.

Once a general enters the political arena, however successful he is, his achievements or reputation become the subject of a factional dispute.

The possibility of Gen Dannatt as Lord Dannatt, with a junior defence ministerial portfolio entering the corridors of the MoD fills some with concern.

Will it prejudice the position of his successor, General Sir David Richards? Or of the Chief of Defence Staff Air Chief Marshal Sir Jock Stirrup?

These are the men who are meant to provide ministers with military advice. They are also meant to be shaping the forthcoming defence review. For this reason, although there were reports earlier in the day that Gen Dannatt would join the ministerial team, later on, the more nebulous term "adviser" was being used.

There are those who welcome Gen Dannatt's step towards a job with the Tories - be it ministerial or something less formal - and I have been following their arguments on the blogosphere: the general is a man of integrity, and wisdom; he knows the forces inside out, unlike most ministers.

All of this is true, and any unprejudiced observer would admit it.

The problem is that once you accept a party political role, so many observers will be prejudiced.