BERLIN - On the European election trail, my travels bring me to this city which I first visited 20 years ago. 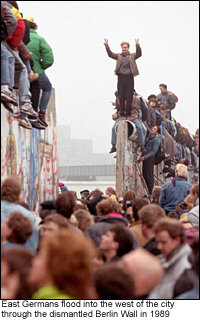 I count myself very lucky that I was able to see first hand the looking glass world of the German Democratic Republic (GDR, or East Germany) before the Wall fell.

It was the only city in the world where you cleared passport and customs control at the exits of underground railway stations.

Today there are quite a few commemorative exhibits marking the fall of the wall - the protest movement increased in pitch during the course of 1989.

But watching some teenagers go around the open air display in Alexandersplatz it was striking how quickly memories fade.

They were from the Karl Bosch upper school in former East Berlin and their teachers told me the kids had absolutely no understanding of what life in the GDR had been like.

A recent poll across all of Germany revealed that more than half the population did not realise the GDR had been a one party state.

The photos in the Alexandersplatz exhibition show dissidents - greens, Christian groups, and human rights protestors. I am reminded of their bravery and wonder what they would make of this remarkable national amnesia.

Germany, under the spectre of recession, is seeing a drift to the extremes. Both "browns" of the extreme right like the BVU and NPD and reformed socialists of the Linke (or left) PDS are expected to do well in the Euro elections and September's national polls.

In some former areas of the GDR the extreme right and left parties combined are expected to get anything up to one third of the vote.

I met up with Lothar Bisky, a senior figure in the Linke PDS, and onetime leading GDR film maker.

Although prominent in East German society, he was not a party member back then. He explains, that, "we have learned from our history". Mr Bisky is talking about the failures of the East German communist state.

Although some old "Ossis" will clearly vote for his party because they are nostalgic, the Linke PDS is doing well in the polls (with an expected vote of around 10% nationally) because of widespread concern about the failure of free market economics.

Although Mr Bisky is sure that nobody wants to recreate the GDR, he does not appear quite so certain that Germany has learnt from its earlier history.

He voiced great concern about the growth in support for the "browns" of far right as Germany's unemployment climbs.

Most people here believe that the effects of recession are just starting to make themselves felt - that the "tsunami" of unemployment will come later this year or in 2010.

At that point many expect an even more polarised debate here, with a diminished centre, and new battle lines drawn on the far right and left.

continentalman - thanks for those insights about the state of play in the former East. I agree with you that the current importance of the "browns" should not be over-played.

hdrafael - thanks for that information about SED membership. I had been told otherwise, but I'm glad you've put the record straight.