Hillary has been quick off the blocks 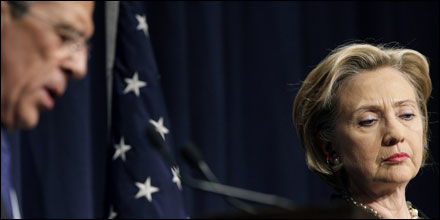 WASHINGTON - Hillary Clinton has been jetting about the world successfully making her presence felt. She's actually back here today, seeing the Indian Foreign Minister in her office at the State Department. It's a key economic and security relationship for the US.

She's been racking up the air miles since taking over the USA's chief diplomat, visiting the Far East, Middle East and Nato. The key thing about this globe trotting is that is hasn't just consisted of photo ops. She has been taking the lead to restore good relations with Russia, symbolically 're-setting' the relationship at a meeting with counterpart Sergei Lavrov last week. She's also sent important signals in the Middle East; on the humanitarian situation in Gaza or relations with Syria, and extended a hand to Iran, inviting them to a meeting on Afghanistan.

When President Obama was inaugurated I expected the economic crisis to limit his impact on foreign affairs - and this has proven to be the case, so far at least. But what Ms Clinton has shown, is that his plans to devolve the day to day running of foreign policy to others have got off to a good start.

Some of us wondered how Ms Clinton was supposed to fit in with National Security advisor General James Jones, the 'super envoys' appointed to various parts of the world, or indeed the Vice President, Joe Biden, who has been given the job of overseeing foreign policy. Was the new president setting the scene for a struggle akin to that which Mssrs Rumsfeld, Powell and Cheney waged during his predecessor's first term?

It seems that the Obama team is able to get along rather better. Ms Clinton's initiatives on Russia or the Middle East have constituted significant steps that could not have been taken without her president's authority. He has delegated to a political beast big enough to get out into the global jungle, and she is relishing it. One of the US breakfast TV shows ran a segment this morning of the Secretary of State on Turkish television talking about how she likes going for long walks with her husband and misses being able to sit by herself in a café. It was harmless trivia, but just as we have seen some major politicians diminished when they are separated from the well of power, so Ms Clinton seems rejuvenated by being allowed to draw its waters once more.

Of course it is early days - the Obama administration has yet to face a severe test overseas. It may be that they will be at one another's throats once the pressure ratchets up. But the early indications are that the Secretary of State has wielded her office so effectively that would-be Washington rivals have been left in the starting blocks.