Few people know that thousands of Commonwealth war graves lie in the battlegrounds of the Gaza strip.

During the recent campaign, the main Gaza War Cemetery suffered extensive damage as Israeli troops and Hamas militants fought nearby.

Now the Commonwealth War Graves Commission is seeking compensation from Israel, the BBC has learned.

The organisation estimates the cost of repairing or replacing the 363 headstones damaged by recent Israeli shelling at £95,000.

The graveyards date from 1917 when British divisions fought their way into Palestine against intense opposition from defending Ottoman Turkish forces.

After costly setbacks in Gaza, the British eventually gained the upper hand, defeating Turkish troops in the country, so paving the way for the creation of modern Israel.

The role of that campaign in shaping the modern Middle East means that even today, the soldiers' resting places remain powerfully symbolic.

Last April the cross shaped monument at the centre of the Deir al-Balah Commonwealth cemetery was blown up, apparently by Islamic militants.

For me, getting to the Gaza War Cemetery became a personal pilgrimage.

Although I have covered Middle East affairs for the BBC for nearly 20 years, it was only recently that I learned that my great uncle, Lance Sergeant Walter Holmes, had been killed in Gaza on 19 April 1917 and laid to rest at the Commonwealth War Cemetery there.

L/Sgt Holmes was just 18 years old when he fell in the Second Battle of Gaza.

His battalion, the Isle of Wight Rifles (or Eighth Battalion, the Hampshire Regiment) launched its attack on that fateful day with over 800 men, only 92 of whom returned to British lines.

They were among 6,000 Allied casualties in a slaughter that rivalled some of the worst scenes on the Western Front.

Reaching the cemetery for the first time earlier this month, I found that my great uncle's headstone was one of those damaged in January's shelling.

It suffered two chips from shrapnel.

Of course, you only have to speak to people nearby to be reminded about the hardships and losses suffered by the living during January's fighting.

Adil al-Jidba, a local farmer, told me he had fled the area to what he thought was a safer place only to lose three of his children to Israeli shelling.

The Israeli army, following initial inquiries about damage to the graveyard, said that it has come about as a result of a nearby Palestinian arms dump being hit by an airstrike.

But we observed evidence of Israeli tank and artillery fire among the shattered headstones.

Faced with our questions, an Israeli army spokeswoman has said that units were returning fire at Palestinian fighters in the area of the cemetery. 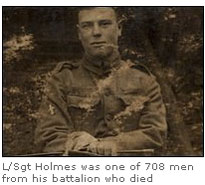 The issue of whether it can produce evidence of this militant fire may well determine the army's response to the British compensation claim.

Writing as a relative of one of those whose headstone was damaged, I recognise that any sadness we may feel is minor compared with those who lost children or had homes destroyed in the recent conflict.

However, the recent incidents at both Deir al-Balah and Gaza Commonwealth cemeteries can be seen as symbolic of the intensification of strife there.

These British graveyards have after all been laid out according to the hallowed principles of the War Graves Commission.

Brothers in arms laid to rest without regard to rank, colour or religion.

It seems these days that some people either care more about today's conflict than respecting those values, or indeed actively dislike what the cemeteries stand for.