A Plan for Afghanistan 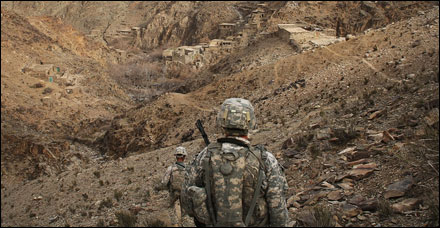 In all the casting around for a new strategic direction in Afghanistan, the country's presidential elections, due this August, represent the elephant in the room. Within the Obama administration, the internal debate rages about whether Afghan president Hamid Karzai is worthy of continued American support.

If the US and its Nato allies go with 'Plan A', they run the risk of widespread Taleban disruption of voting, leading to a turn out so poor that the election may be invalidated or a hardening of ethnic divisions within the country. If they delay the elections either for security reasons or because they are looking for a better candidate to back than Mr Karzai, there are obvious risks too.

Some, like Conservative MP Adam Holloway, favour backing an Afghan political process that would delay elections while a national unity government was formed to include Taleban and other hardline opponents of Mr Karzai. Talks between Afghan political factions were held in Dubai in December towards this end. Elections, their argument goes, might then go ahead in 2010 throughout the country, embracing all political forces. Under this process a timetable would also be set for the withdrawal of foreign troops.

While the Obama administration might be open to new approaches, it's not yet clear it would back a process that both allowed the Taleban a share of power and - theoretically at least - set the course for the removal of foreign forces. It is apparent though from the president's recent pronouncements and those of his officials that their prime objective is denying Afghanistan as a sanctuary to international terrorism. Bold talk of 'freedom and democracy' features less now than it did with the Bush White House, and instead the US defence secretary talks about more realistic goals that might be achieved in a 3-5 year timescale.

What is apparent then is that all kinds of options are being opened up by Washington: to carry on with Plan A; to postpone elections and empower the Karzai government to rule with 'strong man' emergency powers; to postpone while dumping Karzai in favour of a national unity government. The permutations are bewildering. What is clear though is that the calendar logic of troop rotations and the elections may well force Washington to show its hand before a fully formed political strategy (along the lines of the Dubai dialogue among Afghan exile groups) is in place.

Here's my piece from Wednesday on strategy in Afghanistan: