Flying back from Israel, my thoughts turned to media management during the current Gaza offensive. Much of the visiting press has already decamped leaving the resident journalists to carry on with reduced coverage.

Discussing this with the Israeli Prime Minister's spokesman, Mark Regev during my parting visit to the BBC Jerusalem Bureau, he remarked, "well we've succeeded in one of our campaign aims in any case". He was smiling broadly, but was he joking? 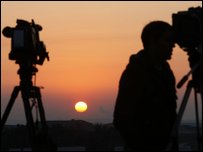 Coming back from the field, I feel a sense of frustration. I had to persuade my own office to keep us out there as long as they did, buying a few more days. But in the end money creeps into people's thoughts and as one London colleague remarked over the phone, putting a brave face on our re-call, "it's starting to slip down the running orders". That was cold comfort - I can report the stuff but I don't control where it comes in the programme.

The BBC Bureau and its Gaza out-station, manned by two heroic local producers remain to tell the story of course. But I can't help but think that one reason why the conflict is dropping in the news agenda is because journalism's big names have been prevented from gaining access to it.

During the 2006 Lebanon war, which lasted 33 days, access was much freer and the story remained big news. By this I mean that editors back home were not complaining of its repetitiveness because each day brought some fresh tale of tragedy, danger or high emotion from teams moving about the combat zone.

In the case of Gaza, Israel had prevented journalists from entering for much of December, with a full ban since the current conflict started, apart from those few given short embeds with the Israeli Defence Force.

I don't doubt there will be some back-slapping in the Israeli ministries at their foresight and success in clamping down on the media, but it has come at the expense of undermining the country's oft repeated argument that it is a lone democracy in the Middle East.

The Israelis are largely responsible for what has happened but not completely so. The kidnap of our colleague Alan Johnston and several others westerners had made Gaza a dangerous place to keep foreign staff. Our managers were rightly worried about letting us stay in there for long periods. In this sense, militants closed off a valuable point of contact with the outside world, much as happened in Chechnya in the 1990s where many of us feared to tread. The dangers though made us all the more dependent on timely access via Israeli's Erez crossing.

When the guns full silent there will be an awful reckoning in Gaza; a tale of disappeared families, and shattered landscapes. Naturally many foreign journalists will be itching to get in to tell those stories. Contacts suggest that the current Israeli ban on foreign journalists will remain in effect for some time. With each week that passes, the newsworthiness of this material will diminish. If this happens it will be good for those who pride themselves on news management but bad for pretty much everybody else - including those Israelis who value their freedoms.

For our first film on the conflict - broadcast on 5 January 2009 - we went to the Gaza border, and were politely seen off...