Pakistan's dept for reconciling the irreconcilable 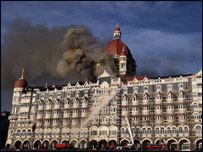 Monday's raids on a camp in Kashmir show that India, the US and Pakistan, which used its army to arrest 'more than a dozen' suspected militants at the site, seem to share a view about what happened in Mumbai. The authorities in Islamabad early demands for proof from India have given way to action based upon the assumption that Lashkar e-Taiba, a Kashmiri militant group, played a key role in organising last month's terrorist attacks on that city. This in turn will lead investigators closer to Inter-Services Intelligence - the ISI - the Pakistani military's organisation for gathering secret information, and one of the most written about but least understood intelligence agencies in the world.

The ISI helped to establish Lashkar e-Taiba, just as it played a key role in organising religious students (Taleban) to fight in Afghanistan. During the 1980s Pakistan's leaders wanted to foment trouble in neighbouring countries and these religious-based organisations were a useful tool in that policy. More recently Pakistani leaders have sworn that they would have nothing to do with organising Mumbai or the blowing up of the Indian embassy in Kabul earlier this year, but nobody who knows the region is completely sure that these events were unconnected with the ISI.

Having met a few serving members of the ISI, the impression they usually give is of serving military officers who are on secondment to military intelligence. In other words they seem no more religious, conspiratorial, or devious than any other service type one meets in the sub-continent, carrying out normal military duties.

There is though an odd duality about many of these people. Meeting one senior officer in ISI recently, I asked him some questions about insurgency in various parts of Pakistan only to have him shoot back at me, "and what efforts have you made to interview the Taleban?" It was a fair question. Was it born of an intelligence officer's curiosity about what 'the opposition' think? Or did he feel that organisations like the BBC do not give enough attention to the Taleban's point of view? Was it, in other words an expression of some form of sympathy for them?

Alas our conversation did not last long enough to get beyond my expressions of anxiety about how such an interview could be conducted without a high risk to myself and others or, indeed, whether he could facilitate it. I may though get in touch with him again to pursue this last question.

The view of some of those in Western organisations that liaise professionally with the ISI is that there is an, educated, politically-sensitive, senior management who have become de-coupled from some of the foot soldiers - the captains or majors who have trained insurgents or run sources in Lashkar e-Taiba or the Taleban. As if this is not already a problem, the ISI has indeed just been through one of its periodical management re-shuffles - something apparently designed to ensure its loyalty to the current army chief.

Some Pakistani observers buy this theory too - hence talk of 'elements within the ISI' still being loyal to the Taleban. It is however an organisation that runs on the basis of military hierarchy, and the New York Times reported today, apparently based on US intelligence briefing, that the CIA believes the ISI has been liaising closely recently with a senior Lashkar e-Taiba militant called Zarrar Shah. This suggests the military command structure must know something about these contacts.

The ISI might argue that penetration of these organisations - including paying some militants - is all part of the struggle for intelligence information. It is also probable that some of the recent US drone attacks on suspected militants in the tribal areas have relied upon intelligence provided by the ISI.

So how does one explain these contradictions: arresting Lashkar militants after years of supporting them? Sympathising with the Taleban while providing the Americans with intelligence needed to kill them? In the end, the ISI is part of Pakistan's impossible balancing act - trying to reconcile its need for cooperation with the west against its sympathy and sense of Islamic solidarity with many of those the Indians or Americans despise. We might marvel at some of the verbal gymnastics of a Pakistani politician trying to explain a recent American attack in the tribal areas but the ISI is different in that it attempts to reconcile the irreconcilable in secret and when it fails, the consequences can be quite terrible.