Is Obama's honeymoon really over already? 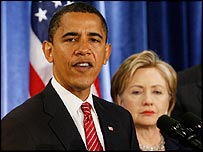 The global honeymoon that accompanied Barack Obama's election was never going to last forever, but there are some people for whom it already appears to be over - even though the president elect will not take power until 21st January. The Illinois senator's desire to name his administration, in order to 'hit the ground running' has already been the cause of some political sniping, and so have his meagre foreign policy pronouncements to date.

The appointment of Rahm Emanuel in October as White House Chief of Staff nettled many. There were his former Republican opponents in the House of Representatives, who consider him abrasively partisan, but I am not talking about them. Put his name and 'Zionist' into Google and you will see what I mean. The brickbats are already flying on certain Islamic, 'progressive', and far right websites.

With the appointment of Hillary Clinton as Secretary of State, the plot thickens for those who wish to imply that a good man - President-elect Obama - is surrounding himself with 'zionists' who will prevent any fresh thinking about Middle East peace. Ms Clinton is not of course Jewish, unlike Mr Emanuel, but she has been a two-term senator for New York state.

"She's had a certain position which has not been very friendly toward the Palestinians", said Karen AbuZayd, Commissioner General of the United Nations Works and Relief Agency on the Today programme this morning, adding, "we hope that there'll be a broader view once she comes into office". Ms AbuZayd's job involves daily dealing with the dismal humanitarian consequences of Israel's blockade of Gaza, so I'm not surprised she longs for a different US foreign policy in the region. But the implication from an international civil servant - who must get on with all the relevant players - that an incoming US Secretary of State is bringing too much political baggage to the job is unusual, to put it mildly. Is it not obvious that Secretary Clinton, representing the US national interest, will serve quite different political imperatives to Senator Clinton, representing one of the largest Jewish democratic constituencies in the world?

It was to be expected that extremists like al Qaeda number two Ayman al-Zawahiri would write off President-elect Obama swiftly, calling him a "house negro", or, depending on which translation you follow, a "house slave". Similarly, Iranian president Mahmoud Ahmadinejad already made a thinly veiled attack on Mr Obama during his speech at the United Nations in September. 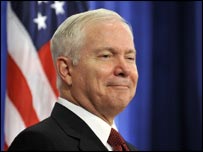 The response to the appointment of the new foreign policy team shows something else. In the first place, the president-elect's campaign promise of change was always going to look less exciting once he put in place the people with the necessary political experience to run their departments. If you think Ms Clinton comes with political baggage - what about Robert Gates, who will switch from being President Bush's defence secretary for the past to years to the new president's administration?

Secondly, there are certain laws of political gravity that cannot be defied, whatever the brand of a new administration. The anti-American imperative is so central to certain ideologies - in this case militant Islam - that any Jewish appointees or appeals to Jewish voters will be used to argue the administration is pro-Zionist. It might turn out to be, but shouldn't everyone wait until the new president has been sworn in and set out some Middle East policies before jumping to that conclusion?