Iraq, Afghanistan and the re-deployment problem

The idea of switching troops from Iraq to Afghanistan seems deceptively simple. In fact the problems of re-deploying Britain's over-stretched army will pose the main constraint on how many more soldiers can be sent if, as expected, President elect Barack Obama mobilises Nato countries to send reinforcements to Afghanistan. 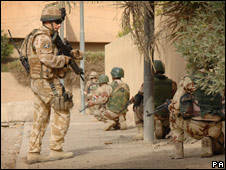 Although ministers are still vague about the timetable of Britain's exit from Iraq, I have been told that it is intended that it will be complete by July 2009. The main period of withdrawal will be during May-June.

By the end of May, headquarters and support elements will have been run down and British combat troops will, for a few weeks, come under the command of an American general. During June the last of the UK battle groups should leave, and under current planning, all of them will be gone by July.

Currently there are around 4,000 servicemen and women in Iraq and 8,000 in Afghanistan. Current planning assumes no combat units would be left in Iraq after July, and even training teams limited to two small units - one working with the Iraqi navy and the other at their officer training school.

The timing of this drawdown is important because military chiefs feel that any reinforcement in Afghanistan needs to be in place in time for that country's elections in September. The MoD does not plan to send the same soldiers (except perhaps the odd truly unfortunate one...) from one theatre to the other, but it cannot mount a significant increase of the garrison in southern Afghanistan unless it can move key items of equipment from one place to the other.

Things are so overstretched in the Army, for example, that there are insufficient sets of up to date body armour to send even one more company (around 120 troops) to Afghanistan, without taking the gear from troops in Iraq. In addition to personal equipment, heavily armoured vehicles will need to be shipped from Iraq in time to be available for the reinforcements in Afghanistan.

These logistic considerations militate in favour of any decision to commit the reinforcement to be made early next year. That decision may follow a major review of the Afghan operation being conducted by US General David Petraeus, which is expected to report in February. 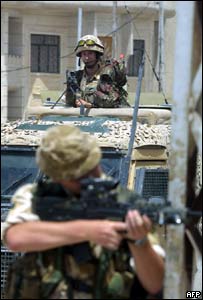 There is though still an argument to be had within the British government about whether switching troops in this way is desirable. Air Chief Marshal Sir Jock Stirrup, Chief of Defence Staff, recently warned against any idea that troops taken from Iraq could easily be sent on other operations. Some senior army officers believe that the Army has been so stressed by 'running hot' on simultaneous operations there and in Afghanistan that it must bank the reductions in Iraq rather than sending more men and women to Afghanistan.

All of this makes it quite unlikely that the forces will simply shift 4,000 posts from operations in one country to the other. Instead, some of those involved in the process think that the Afghanistan commitment would be allowed to grow from its current 8,000 to a symbolically important 10,000. What kind of improvement the net reduction of 2,000 troops on operations would make, in terms of reducing the stress on the forces, is open to question.