Royal Navy keen to be seen as "serious player" 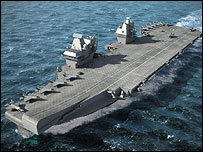 Britain has ordered its new aircraft carriers, and the decision has as much to do with the Royal Navy's image of itself as force to be reckoned with as it does with delivering enhanced combat power.

So while many in the Ministry of Defence (usually officers from the RAF or Army...) predict that the cost will soar far ahead of the projected £4bn, that the programme will bleed the other services white or even that the carriers will never get built, ministers would be unwise to under-estimate what is at stake here.

Whatever the current state of play between cash-strapped armed forces chiefs and the government it is as well to remember that the last time one of the heads of the services actually resigned was in 1966, when Admiral Sir Richard Luce, the First Sea Lord, walked out over the Labour government's decision to phase out aircraft carriers.

The navy spent the next few years subverting that decision, turning anti-submarine ships of the Invincible class into the mini-carriers that remain in service. When the Tories proposed mothballing those ships in 1981, it prompted another resignation - that of Keith Speed, the Navy Minister.

Questions remain concerning the new carriers' cost, the ability of a reduced Royal Navy to crew and run two super-ships with a complement of 1,500 each, and the effects on the rest of the budget.

How will these capital ships be protected if minesweepers, anti-submarine or anti-air vessels are all cut back in order to finance the programme ? The current First Sea Lord, Admiral Sir Jonathon Band is clearly so concerned about the Royal Nay remaining a, "serious player", that he delivered his own veiled threat to resign in front of a Commons committee in March.

The defence argument for aircraft carriers is pretty sound. As floating national bases operating free of the political constraints that constrain air fields in many countries in order to; hit at Britain's enemies, be used in shows of force to deter conflict, deliver disaster relief; or evacuate people from civil wars.

Nevertheless, as the programme goes ahead, aiming to deliver the ships in 2014 and 2016, the budgetary pressure will become enormous. The temptation to delay the programme will probably prove irresistible since it will spread the spending over more years, and the aircraft they are meant to operate, the F-35 Joint Strike Fighter, will not be ready as soon as this (optimistic) schedule for the ships.

Perhaps the bigger and more puzzling question about the future of the Royal Navy is why the government decided so swiftly last year to upgrade its Trident ballistic missile submarines, at a cost of more than £15bn.

Even many of the senior naval officers I spoke to were dubious about the value of this project, preferring to convert their future hunter-killer submarines to fire nuclear-armed cruise missiles instead. When looking for future economies in Britain's unfeasibly over-loaded defence budget ministers would be better advised to re-visit the Trident decision than to threaten the carriers and with them, once more, the Royal Navy's belief that it is still a 'serious player' on the high seas.