Radiohead, Zimbabwe and the spirit of '68 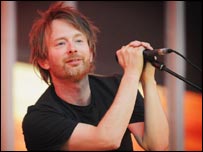 There was a chant of 'Free Tibet' during Radiohead's gig at London's Victoria Park on Tuesday night. Thom Yorke, the band's lead singer, joined in. Opinions differ on whether he started the mantra, or just joined in (when people spotted the Tibetan flag on his piano), but in any case it petered out pretty quickly, with a man near me shouting 'Free Beer!'

Radiohead are a thoughtful, concerned, group - a couple are even regular Newsnight watchers, I'm told. But is this the extent of protest these days ? The wag who wanted free beer got me thinking.

What connection do people feel with world events ? How far do they think they can influence them ? I ask because of the current debate about Zimbabwe, and Tibet in particular but it might equally apply to a host of other situations around the world where people feel outrages are being committed.

When I wrote about Zimbabwe last week, one reader said that the situation there made him feel complicit in murder. But even non-violent members of a democracy have several options: protest, lobbying, spending our money elsewhere, or indeed voting a particular way.

Talking to Bob Satchwell, one of the leading lights in the London School of Economics Students Union during the heady period of 1968-1969, on Monday night, he gleefully recounted how many times the students had stormed the Rhodesian High Commission. The Student's Union had been so close to the embassy, he explained, that the students could get there before the police had time to react.

What are the chances of the Zimbabwean High Commission facing a mass protest today, let alone being stormed?

Now before you throw up barricades or declare a commune in Trafalgar Square, please accept, for the record, that I am not advocating any breach of the law. I do though feel that many people who express outrage about various injustices around the world are being a little feeble in the exercise of their right to protest. 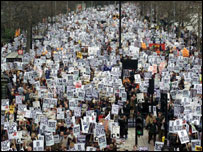 Now some of you might argue that one or two million marching through London against the war in Iraq did not stop it happening, so what is the point in protest? But why should you only state your views or take action if you think you are going to win? It's not as if the student radicals of 1968 'won' in the broadest sense, although they did of course play a role in America's withdrawal from Vietnam. And if you want to go the whole hog - thousands went to fight for the International Brigades during the Spanish civil war, hundreds of them dying, but their side lost to the fascists.

Today, in the case of Tibet or Zimbabwe even sporting embargoes seem unlikely. The Dalai Lama hesitates to urge an Olympic boycott and the cricketing authorities risk a clash with the British government over President Mugabe's election plans. But if few people want to get in the way of 'fun', and many are fearful of surveillance or Terrorism Act convictions that might follow an embassy storming what about the simplest form of personal protest: not spending your money on a country's products.

Even this is not straightforward sometimes. Those who do not wish to buy a product 'Made in Israel' be advised that the fruit of many a Palestinian's labour is sold under this label. But even where the picture is clearer, do people really have the ideological commitment to follow through?

If supporting Tibet meant a China-free shopping experience, how many people could manage it? The Radiohead fan might ask where the components in his ipod come from, or mobile phone or whether his trainers are the product of Guangzhou Special Economic Zone. Would it be possible for Thom Yorke to warble to his fans via a China-free sound system?

Personally, I don't mind the guy who called out for 'Free Beer' in Victoria Park. AJP Taylor, that revered historian of the 20th Century, no less, remarked that all of the great characters in history were, "there for the beer", but which he meant motivated by self interest. But the people he was writing about were usually also masterful opportunists who turned the openings available to them to maximum advantage. The average British voter clearly has fewer levers of power than Lenin or Hitler night have done, but he still has some.

The current malaise in western societies is for too many people to assume they can make no difference, to be completely cynical about protest or lobbying and simply to assume that extreme opinions expressed in the pub or on the web are a substitute for action - even if that action may be as small as declining to buy trainers or wine from a certain country.

There are a few exceptions - direct action environmentalists for example. But I can think of another - the handful of British-born jihadists who have gone to fight in Iraq or Afghanistan. These sons of Bradford or Croydon are surely though the exception that proves the rule. In their case this drastic step marks the final stage in a rejection of western values and, in their eyes, apathy.