As summer approaches we thought it was about time we revisited the row we got into late last year with the influential right-leaning think tank Policy Exchange. It's almost six months since we broadcast our investigation into Policy Exchange's report "The Hijacking of British Islam" which named and shamed mosques across the UK for disseminating extremist literature. We have a new statement from them, but more of that later.

(Watch the original report, followed by the interview with the Research Director of the Policy Exchange, below:)

Here's a quick reminder about the original story: outside researchers working for Policy Exchange on the report visited 100 mosques and Islamic institutions and said they found extremist books available in a quarter of the survey sample. The researchers had obtained receipts as evidence. These were shocking findings and, unsurprisingly, the report made front page news.

Newsnight too had been planning to broadcast a detailed film based on these findings but when we began checking the receipts a rather different story emerged.

The first anomaly we found was in the receipt said to have been obtained from the Muslim Cultural Heritage Centre in West London. The document contained basic spelling errors in the address (see below). We showed it to the centre's director who strongly denied it was genuine.

When we looked at some of the other receipts we were concerned enough to suspend our broadcast while we checked them. This approach was derided by Policy Exchange's chairman, Charles Moore, who suggested we should have simply broadcast the findings and allowed the mosques to have their say. We took the view that this was not a sensible way forward and began detailed checks.

- forensic evidence suggested that at least one receipt had been forged

- there were basic mistakes in the addresses printed on three receipts

- all of the receipts we had suspicions about had been printed on home-style ink jet printers. Ink jets are usually used for one-offs or for limited print runs because of expense.

We're republishing the receipts so you can judge for yourself.

On 19th December Policy Exchange released a statement standing by their report but advising readers that "as an evidence-based research organisation, we take the allegations made seriously". It continued: "Our investigations must be allowed time to proceed."

Well surely six months is enough? I contacted Policy Exchange's external relations director Dr Steven King for an update. He got back to me this week with a statement saying that the independent inquiry had been "adjourned" because "the Muslim researchers who conducted the original investigation into the mosques have gone into hiding for fear of violent reprisals after Newsnight revealed their whereabouts on air, in breach of an undertaking given to Policy Exchange. Following the Newsnight broadcast, an Islamist website denounced the undercover researchers and called for them to be hunted down. Policy Exchange takes any allegations against its research methodology seriously, and so is keeping the investigation open in case circumstances change making it possible for it to be completed."

Just to be clear - we didn't identify the researchers, we reported which country they were in, which was the reason why PE said they could not be contacted for interview.

Policy Exchange's most recent statement also states that the report "does not mention the receipts or rely on them as evidence, and Policy Exchange stands by the study's content".

Newsnight finds that argument surprising. Policy Exchange has argued that the report is justified because extremist literature was discovered in the mosques. But if researchers working for Policy Exchange put forward evidence, some of which was flawed, then what reliance should be placed on this influential report which was advertised as "the most comprehensive academic survey of its kind ever produced in the UK"? What is reliable and what is unreliable?

Six months down the line the think tank has still not answered the most basic question of all: were some of the receipts fabricated? Given Policy Exchange's decision to put their internal investigation on hold, it seems unlikely we'll be getting an answer any time soon.

Several of the mosques said they were prepared to take legal action against the report and have instructed libel lawyers. Leading libel firm Carter-Ruck said: "we have been instructed by Al-Manaar Muslim Cultural Heritage Centre and Masjid and Madrasa al-Tawhid ("Al-Tawhid Mosque") to bring a complaint for libel against Policy Exchange in respect of allegations contained in the report The hijacking of British Islam... which we anticipate making shortly". 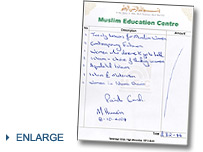 A registered forensic document examiner conducted an ESDA test on this receipt from High Wycombe Muslim Education Centre. This test proved that the High Wycombe receipt was filled in while resting on top of another receipt supposedly from a mosque in West London - 40 miles away. Policy Exchange has yet to comment on how this might have occurred. 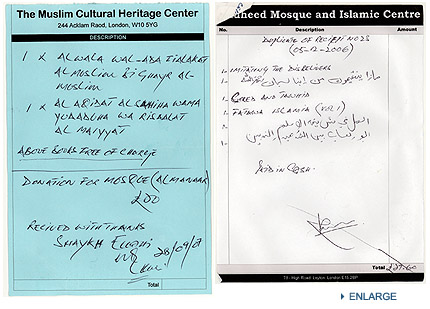 Take a close look at the hand-writing on these two receipts, supposedly obtained from different mosques 10 miles apart. To my eye they look identical. The registered forensic document examiner concluded there was "strong evidence" that these two documents were written by the same person. This is the second highest degree of certainty in forensic examinations of this kind.

Furthermore, note the misspelling of raod and center on the Muslim Cultural Heritage receipt. And the address on the receipt for Leyton Mosque is wrong: it gives the address of an independently owned bookshop next door, not the mosque itself. Policy Exchange claims the researcher was "led" from the mosque into the bookshop and therefore the mosque sanctioned the purchase of extremist materials. Their argument appears to be that this is the same as the mosque actually selling the material itself. However this version of events was not spelled out in the report.

In a similar fashion, the report also said that extremist material had been bought from East London mosque. This particular claim featured in the Times but the newspaper backtracked a week after our broadcast: "We would like to make clear that the bookshop situated near the East London Mosque....is a commercial tenant of the Mosque and is situated on different premises. The chairman of the Mosque, Dr Muhammad Abdul Bari, has no responsibility for or control over the material that is being sold there. We apologise to Dr Bari for any distress caused." 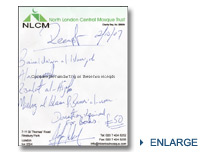 The researchers working on the Policy Exchange report said they obtained this receipt from the North London Central Mosque in Finsbury Park. The management there deny all knowledge, and say it's a forgery. Like the other suspect receipts, this document was printed on an ink-jet printer - the kind used for small print runs at home. 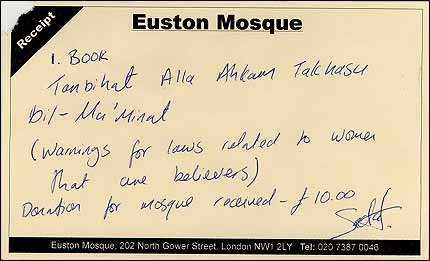 This receipt issued in the name of "Euston Mosque" inexplicably gives its address as 202 North Gower Street - which is in fact the address of an entirely different organisation around the corner known as the UK Islamic Mission. Euston Mosque is located at 204a North Gower Street, as any simple check would have shown. The elders at Euston mosque told us it's a forgery. They showed us their genuine, numbered receipt book, which is very different to this receipt. At first Policy Exchange argued they were not able to explain this anomaly because their researchers were "away on a retreat". Later they argued the extremist books were from the UK Islamic Mission around the corner from Euston Mosque (something UKIM denies). But if that was the case then how and why did they obtain a receipt in the name of "Euston Mosque"?