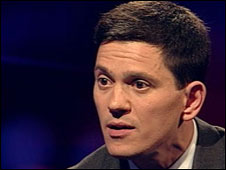 On Wednesday we asked what questions you would like to ask the Foreign Secretary David Miliband - and more than 175 of you responded.

During the live interview Jeremy used questions by Graham Nickson and LarsonsMum - and David Miliband agreed to respond to other questions online - which he has now done.
He didn't answer them all - but the ones we chose that we thought fairly represented the issues raised by you.

CLIMATE
1. roydosan wrote:
Why is the government persisting with biofuels? When there is so much evidence about the harm they cause, why do we need another review/enquiry into them, can you not just take the decision to ban them?

The simple answer is that biofuels have the potential to provide low carbon sources of fuel. That is not to say that all biofuels do - for example the science points much more strongly to sugar rather than corn based fuels. But the potential is serious. We are alive to the dangers and indeed the Prime Minster recently wrote to Japan's Prime Minister Fukuda (as chair of the G8) on the issue. As a result, a UN Taskforce has been set up. The Government has also called for Professor Ed Gallagher, the former CEO of the Environment Agency, to review the indirect impacts of biofuels. He will publish his review in June and the findings will inform Government policy on biofuels. In the meantime the Government is fully involved in the development of sustainability criteria for biofuels in the EU and at the wider international level. The UK is among the world leaders in this field. The Government is also providing some support for technology development for biofuels and is considering what further measures may be required.

2. emptyend wrote:
How is a low-carbon economy compatible with calling for more production from OPEC? Why has this Government been frittering away the inheritance of North Sea oil and discouraging further exploration by sharply raising North Sea oil taxes two years ago?

There is important difference between short term problems and long term solutions. As I set out in my speech on Wednesday the mismatch of supply and demand that leads to high oil prices needs to be addressed by containing demand (by finding alternatives). The Government is also in the short term working with industry to address North Sea oil and gas reserves. Through the successful PILOT forum, our licensing innovations and the fallow initiative we have seen both higher levels of exploration and development of reserves that would not previously have been realised. We are also working with industry to unlock the gas potential West of Shetland. Treasury officials are currently consulting with industry on whether there is a need for any special measures to incentivise development of marginal discoveries, including the currently "stranded" gas reserves West of Shetland.

3. Tabasco1 wrote:
It will fall to you, Mr Miliband, to present the UK case to the Chinese and Indians that they should not build coal-fired power stations without operational carbon capture technology fitted from the outset. As it is your government is planning to give the green light to unabated coal-fired power stations in the UK. If this policy is not reversed, will you not - to use Nye Bevan's phrase about negotiations with the Soviets - be going into the conference chamber naked?

As energy prices continue to rise and energy security becomes both a foreign and domestic policy priority across the countries of the world, nations are increasingly turning to coal as a flexible, cheap and secure energy option. The IEA has predicted that by 2050 global energy demand will have increased by around 50% with significant portions of that coming from the emerging economies of India and China and based around their considerable reserves of coal. We will not be able to get a global deal on climate unless we can find a way of letting India, China and others continue to burn coal. As the Stern Review identified, carbon capture and storage is the key technology to allow us to continue to use coal. This is one reason why the UK's work on carbon capture and storage is so important. We are working towards the world's first commercial-scale demonstration project of carbon capture and storage on post-combustion coal. This should pave the way for improvements and cost reductions in this technology, making it more attractive and accessible for economies such as China and India to take up.

4. rdrake98 wrote:
What's the best book you've read that puts the case, from a scientific point of view, that global warming isn't a crisis that needs the attention of policy makers? If you cannot name such a book, what is the best book on policy that argues that even if the view presented by the IPCC to policy makers is broadly correct, most of the current suggested policy measures are likely to be futile or counterproductive?
What was the best argument that you read against increased production of biofuels at least a year or more ago?
If you have trouble answering the last, don't you think you should soon have better answers to the first two?
Lastly, if books on science are too hard, are you still sure it was wise to say that you would not even watch the documentary "The Great Global Warming Swindle" when it came out in March of last year? (There were some excellent scientists on it. Of course the argument was a little simplified, as you'd expect in such a documentary. That's the why the initial questions were about the best books.)

I have just read Nigel Lawson's book arguing against the conventional wisdom on climate change - so that is the most recent. He is not a scientist but summarises the argument against. I think the IPCC and other books - the non scientific summary in The Weather Makers is good - outweigh his arguments. The Great Global Warming Swindle interviewed some impressive scientists - but since the programme aired, some of those scientists have been making it known that they were misrepresented, taken out of context, and misled on the purpose of the programme. For example, Professor Carl Wunsch, from MIT, has said he was "completely misrepresented" by the programme.

5. bookhimdano wrote:
Why are up to 50% of planning applications for solar panels being turned down? Why have the micro generation grants stopped? Why have taxes been raised on vegetable oil to make it more expensive than diesel? We have hundreds of acres of empty roof and garden space for panels, windmills and heat pumps yet the planners obstruct citing it's 'out of character'. Well they didn't have those things 100 years ago so of course it's 'out of character. How mad is that.

The situation isn't as mad as you suggest! Recent changes to planning requirements for microgeneration mean that from 6 April 2008 the majority of micro-generation technologies are covered by permitted development, with the exception of Air Source Heat Pumps and Wind Turbines. This means the majority of technologies will not require people to apply for specific planning permission. Microgeneration grants have not stopped. The Low Carbon Buildings Programme Phase 1 household stream, with the remaining £10 million budget, was recently extended to June 2010 for new applications or as long as funds are available, whichever is sooner. We are currently seeing a steady flow of applications and the programme is making good progress. There's more information on this at www.lcbp.org.uk.

6. Considering how much utility bills and basic living costs have already risen, how will private companies be prevented from passing on the costs of reducing their carbon footprints to the public?

We've got a number of initiatives in place to help people who are seeing their fuel bills increasing -- including providing grants for vulnerable people through Warm Front, increasing the Winter Fuel Payment, and most importantly the obligation on energy suppliers to improve the energy efficiency of their customers' homes. From this year, energy companies will have to double that effort. Between now and 2011, we're requiring them to spend around £3 billion on everything from low energy light bulbs and insulation to helping people install microgeneration -- both cutting emissions, and the fuel bills of millions of people. Every pound invested by energy companies to date has benefited their customers by at least £9. I'd encourage anyone interested in this, or in accessing other grants and advice on cutting their energy bills and the environmental footprint of their homes, to call the 'Act on CO2' advice line.

BURMA
7. PaddyN wrote:
Can I ask David Millband, MP, what the government plans to do to help the poor citizens suffering in Burma from the recent cyclone? I offer my deepest sympathies all those affected by the terrible catastrophe unfolding in Burma. The scale of the devastation is truly staggering. M y heart goes out to the many thousands of people who have lost their loved ones, their homes and livelihoods.

The government has made an initial pledge of £5m which will go towards meeting immediate needs including food, shelter and access to clean water. A UK emergency relief team will travel to Burma as soon as possible, and we are working closely with aid organisations on the ground. Getting aid through to those who are in desperate need is our top priority. We are using all channels to urge the Burmese Government to grant unrestricted access to the international relief effort. We are determined to do all we can to save as many lives as possible.

ISRAEL
8. georgemclean wrote:
What are David's views on the idea of a single, secular democratic state of Israel/Palestine rather than the two-state solution that has been pursued for so long now?

I support a two state solution as do the majority of Israeli and Palestinian leaders and people.

ZIMBABWE
9. rayall wrote:
Zimbabwe - when is the Brit govt. going to get cross with the failure by "Africa" to DO anything about Mugabe other than support and applaud him. In particular Malawi and South Africa - especially Mbeki with his No crisis in Zimbabwe, Allow transit of Chinese arms and refusal to allow subject to be raised in Security Council. By all means let Africa deal with their problems provided they do something in face of killings and lootings by ZANU PF.

We are pursuing a three step process: 1) Support for democratic movements in Zimbabwe; 2) Encouragement of African leaders; 3) And international mobilisation through the UN. President Mugabe has not yet stolen the election and it is vital that he is not allowed to do so. The greatest responsibility falls on African leaders but we all have a role to play.