BBC colleagues who accidentally overheard David Cameron last Friday evening, while rehearsing his speech to the Conservatives’ (so-called) Spring Forum in Gateshead, were struck by the important role which the Shadow Education Secretary – and regular Newsnight Review panellist – Michael Gove played in the proceedings. 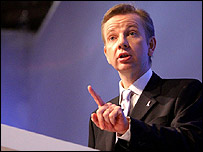 “He was really cracking the whip,” I’m told, in advising Cameron very forcefully on using softer language. Gove advised him, for instance, to refer to “mothers and fathers” rather than “parents”, and how it was best to avoid an old-fashioned phrase like “creeds and colours”.

Michael Gove has long been identified as a rising star on the Conservative front bench, a moderniser and close ally of Cameron, but my colleagues were surprised at how much the Tory leader was happy to defer to his education spokesman. Until now it had been thought that Steve Hilton was Cameron’s chief modernisation guru. Although Hilton was among those listening to David Cameron's rehearsal, he said very little in comparison with Gove.

Michael Gove seemed to be arguing recently on Head to Head that the rigour of the US Presidential campaign was sufficient to ensure that the person who triumphed would inevitably be a worthy holder of the office. Whether he applies this retrospectively he didn't say, but it seemed a remarkably muddle-headed notion. Mr Gove's mellifluous fluency and wavy-handedness bring on my turns something chronic.

How odd that Michael Gove is modernising Cameron's English construction. I can never look at Gove without that timeless public school epithet: "Prig" leaps into my mind. However, I was more struck by Cameron referring to "My MPs" when insisting to John Sopel that he is not the Punch and Judy man. When Gove has finished softening Dave, perhaps he could tell him that, in a democracy, the idea is that MPs are "ours" not his.

"So what" - as a certain little Labour gargoyle said recently. Nothing strange about Gove helping to coach Cameron in developing his speech. I always used to get colleagues to give me constructive comments when rehearsing important presentations. I did the same for them.

Maybe it should be mandatory for all MPs and their advisors to be S.P.E.C.T screened?

Many thanks for the links - chilling.
Utterly relevant to Blair of course but Tobacco Baron Ken and Baroness Margaret sprang to mind also.

Do you have a plan yet?

Barrie, Chilling indeed. I fear not even Adrienne has a plan to counter these types. The big problem as I see it, is that we are not as 'good' at manipulating people as they are. So we can never win. If we were as 'good' at it as they are, then we would BE them! So scuppered.