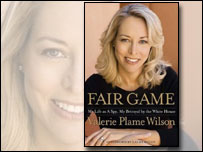 The latest entry into the Newsnight Book Club is Valerie Plame's Fair Game.

Valerie Plame Wilson is the woman at the centre of the scandal that, ultimately, led to the downfall, prosecution and conviction of the former White House chief of staff, Lewis 'Scooter' Libby, for revealing her identity as a CIA spy.

In Fair Game, Valerie Plame Wilson tells her side of the story, and details her life as a spy. The following extract covers the moment her identity was revealed.

Sections of Fair Game have been blacked out. Ellipses within the following text – denoted by [------------] – indicate the places where the CIA has ordered cuts.

Our bedroom was just beginning to show the first hints of morning light on July 14 when Joe marched in, dropped the newspaper on the bed, and said in a tight voice, “Well, the SOB did it.” He set a steaming mug of coffee on my bedside table and left the room. What? I struggled to wake up. I sat up, switched on the lamp, and opened the Washington Post to the op-ed page; I didn’t know what I would find, but I knew it wouldn’t be good. Robert Novak had written in his column that “Wilson never worked for the CIA, but his wife, Valerie Plame, is an Agency operative on weapons of mass destruction.” The words were right there on the page, in black and white, but I could not take them in. I felt like I had been sucker-punched, hard, in the gut. Although we had known for several days that he had my name and knew where I worked, we never believed for a moment he would actually print it or that the Agency would allow it. It was surreal.

I dropped the paper to the floor and tried to think clearly, but my mind was racing in a hundred directions at once. There was so much to consider, so many people to worry about. [-----------------------------------------------------
-------------------------------------------------] What about the many people overseas I had met under completely innocent circumstances? They too could come under a cloud of suspicion if their governments learned of our contact. I tried to calculate the level of risk and weirdly sought to remember if Novak’s column ran overseas, as though that would make it better if it didn’t appear outside the United States. The next instantaneous thought was for my family’s security. There are many disturbed people out there who hate the CIA or anyone associated with it. I didn’t want to deal with a stranger on my doorstep or worse. Furthermore, Al Qaeda now had an identified CIA operative to put into their target mix.

I thought of my three-year-old twins and a ferocious maternal protectiveness welled up in me. I put on my robe and checked in on them in their cribs, each clutching their favorite stuffed animal, sleeping deeply. As I walked downstairs to the kitchen in a fog, I pondered the fate of my [-------------] career with the CIA as a covert operations officer. The questions I had in my head in Chicago came flooding back in a roar. How exactly did Novak get my name? Why did he think fingering me was newsworthy? Joe’s trip to Niger was obviously no boondoggle. And why did Novak use my maiden name—Plame—when I had used Wilson since I married in 1998? I could barely breathe.

I got dressed, fixed the twins’ breakfast, mediated their little squabbles, greeted the nanny on her arrival and gave her the day’s instructions, hunted for the car keys, and tried to get out the door by 8 A.M. all in a zombie-like state. I don’t remember Joe and me saying much at all to each other that morning. What was there to discuss at that moment anyway? At one point, I called the Acting Chief of CPD, already in his office, and talked briefly. There wasn’t much he or I could do at that point. Of all days, that morning I was scheduled to begin a weeklong “management and leadership” course. I had not taken any training classes for the last two years because work had simply been too busy. The Agency is a big advocate of continuing education as a prerequisite for promotional advancement, so I signed up for the course in what we all thought would be a relatively slow and quiet period. As I sat in Washington’s terminally congested traffic en route to a CIA classroom in an outbuilding somewhere in the Virginia suburbs, I felt a new emotion begin to bubble up – anger. [--------------------------------------------
-----------------------------------------] I had served my country loyally [---------------------------] I had played by all the rules. I had tried to always act professionally and competently. Was it all about to be thrown away in a moment? And if so, why? And what about all my friends and family who didn’t know I really worked for the CIA? Would they hate me for lying to them [------------------------]?

As I sat in the classroom with forty or so other officers drawn from all over the Agency and heard the instructor drone on about CIA core values, mission, and its desire to improve its managerial cadre, I put on my best “interested and engaged” look, but my thoughts were far away. I went over the last few months to piece together how and why I was being pulled into the public square. As I sat in the classroom with my mind racing, back at our home our neighbor spotted Joe on the back deck, where he was smoking a cigar and trying to make sense of what had just happened. The neighbor held up his newspaper and shouted, “Hey, what’s this about your wife?” I think that it was one of the rare times that Joe was at a loss for words.

Hold on... while Valerie Plame's CIA "outing" was distressing for her personally, and a criminal act which revealed Dick Cheney's petty vengefulness, let's not forget the much more disturbing story behind it: the Bush administration's deliberate "twisting" of intelligence information to justify the Iraq invasion.

Remember, Plame's husband - a loyal US career diplomat - had returned from a CIA mission to Niger, at Cheney's request, to report it "highly doubtful" that Saddam had bought uranium ore there. Hence his astonishment at hearing President Bush later repeat the claim in a speech.

As he pointed out in his famous New York Times article: "The act of war is the last option of a democracy, taken when there is a grave threat to our national security. More than 200 American soldiers have lost their lives in Iraq already. We have a duty to ensure that their sacrifice came for the right reasons."

Plame's story - while revealing the ugly lengths some of Washington's conservative ideologues will go to cover their tracks - is a minor offshoot of that much greater scandal.