Newsnight's "Übergeek" Adam Livingstone on the things we think we know. 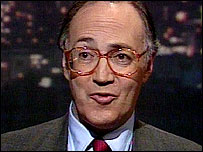 Ask yourself this. Which government minister did Jeremy Paxman famously ask the same question of 14 times? If your answer is Michael Howard, the then Home Secretary, then you, in common with most people, are entirely wrong. But you'd be pretty well justified in thinking it as you've probably read that version of reality in every paper in the land at one time or another, possibly even this week. Plenty of people at Newsnight seem to believe it's true too.

Journalists are busy people. You can't expect us to check ALL the facts. Especially the ones we already know. I don't check that Tony Blair is Prime Minister before I put it in a script. And likewise no-one ever checks that Michael Howard was Home Secretary when Jeremy asked him THAT question 14 times back in the 1990's (watch it here). Except of course he wasn't. It's an urban myth. A quick google reveals that the date of the interview, 13 May 1997, was after the election. If Howard HAD still been Home Secretary rather than a flagging party leadership candidate, it's hard to imagine he would have put himself in such a horrendous position in the first place. But one shouldn't let the facts get in the way of a better story. And by the way, it was 12 times and not 14. 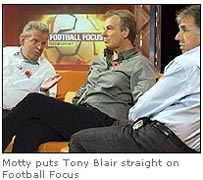 We once spent a few weeks, with the help of Peter Oborne, trying to prove or disprove another famous media myth - that Tony Blair claimed on some radio show to have seen Jackie Milburn play for Newcastle. After much hunting we found the original tape in some deep lost catacomb of the BBC, and it proved that Blair had never said any such thing, and was completely honest in his denials of having ever made the claim. "Prime Minister tells truth" isn't much of a headline, even in such cynical times as these, so the story didn't quite have the impact of the original myth. But anyway, the truth was now out there. And that, I thought, was the end of the matter.

But just out of curiosity I set up a Google News Alert, which sends me an e-mail whenever the words "Tony Blair" and "Jackie Milburn" are mentioned in the same place. And sure enough, month after month, the myth trickles on through the back channels of the Internet and various obscure articles. In the end it's become the accepted wisdom, even though it's patently not true. Just like Paxman and the Home Secretary. Makes me wonder how many other things I know are true are actually complete rubbish.

ie As I mentioned in my posts on the Merkel Article: Mass Murder committed by the RAF in WW2 in Dresden was not an act of revenge or heroism but an act of indescriminate murder, right?

Some Germans helped and were killed for helping Jewish people in WW2 even if their efforts were on a small basis, such as in the book "they weren´t all murderers" by Michael Degen. They did not all agree with what they were doing as is often portrayed but they also feared for their lives if they didn´t comply. Resistance meant certain death and for normal Germans to form a resistance was nigh on impossible, any resistance that was formed was never recognised officially by British sources sometimes actively ignored.

Most of what we read is rubbish, I agree, and I suggest the only way round it is to treat everything as theory. Like literary theory, just one way of seeing something. The more languages you know, the more people you talk to from different backgrounds, the more places you´ve lived and the more lifestyles you´ve lived under, the more roles you´ve played, the more contravertial things you do eventually pays off as you form your own hard wired subconcious feeling by which you judge everything called "the truth" that no one can nag you out of.

The more you encounter, the more you see things from different angles, the more arguements and differing theories you learn not just from books but life, along with adding a dash of your own "bacardi of intuition" into the cocktail the closer it is likely to be to the real truth out there. That is when you haven´t just read it, you know the news!!!

Hence you thinking in the back of your mind before writing this blog, it was 12 times and not 14, wasn´t it?