For most of us autumn will conjure up thoughts of deciduous woodlands transformed into a splendid array of mellow colours, wind-swept days, and acorns and conkers falling to the ground. As a wildlife enthusiasts equally evocative of autumn for me are the sound of clashing antlers and roars of stags that signal the on-set of the rut for the three largest of our six free living species of deer in Britain. 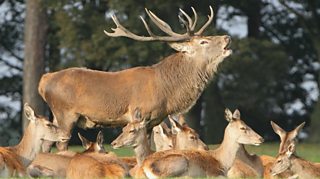 The mating season for red, sika and fallow deer may stretch out over eight weeks, but for all reaches its peak sometime during October. Having lived placidly together in bachelor groups over the summer, in September the mature males develop thickened necks and manes, become increasingly aggressive to one another, and set off in search of female groups and mating grounds.

The ensuing spectacle of the rut has all the ingredients of a cinema blockbuster, as high-ranking males lock antlers in fierce battles for supremacy and access to females, which can lead to injuries and sometimes death for the looser. Such battles are preceded by a wide range of ritualistic displays including thrashing of vegetation, wallowing in mud, and parallel walking to suss out the opposition, all backed by a soundtrack of the loud roaring of red stags, the deep belching groans of fallow bucks, or eerie high-pitched whistling of the sika. The prize at stake is to be one of the small proportion of sexually mature males to dominate the vast majority of matings that season, either over a large harem of females that a stag may repeatedly chivvy to keep together, or within a prime mating territory he will defend fiercely against other males.
Aside from well-known deer forests such as Cannock Chase, The Forest of Dean, The New Forest, and the Scottish Highlands and Islands, some of the prime places to observe the autumn deer rut are the numerous readily accessible deer parks located within easy reach of most of our major cities.

If observing the rut however please arm yourself with binoculars or camera with zoom lens, and don’t be tempted to approach the deer closer than about 200 metres, to avoid disrupting the natural behaviour of the deer as well as for personal safety.

One other consequence of the heightened mobility of deer during the rut, is that they will often blindly run across roads with little else on their mind, leading to a spike in fallow, red and sika deer road casualties around end of October – an issue Autumnwatch will be investigating more during this year’s live programs.