Ben Eardley, project manager and Tom Matchet, ranger – share what’s happened to the first male and female beaver released at the National Trust’s Holnicote Estate on the edge of Exmoor.

Having once been an important part of the natural environment, beavers became extinct on mainland Britain in the 16th century due to hunting for their fur, meat and scent glands. 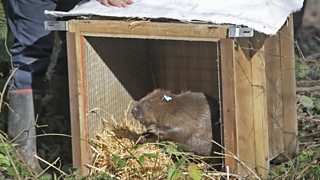 The return of the beavers…the story so far…

“We released our beavers in January after spending several months preparing the site for them.

“Beavers thrive in stream fed wet woodland, so we created a 2.7 hectare area of unmanaged woodland for them to create their new home which included streams and  ponds with plenty of plants and woody material for them to eat and build with.

“Since their release in January, the enclosure has transformed and there are now lots of succulent green plants for the beavers to tuck into.  The area is full of colour and sounds as plants, insects and animals get into the swing of summer.

“The team put up a web cam so we’ve been able to really get to know what our beavers get up to.

“So far we have seen lots of footage of them feeding and how they behave at different times during the day, but also how they interact with other wildlife such as fox, otter and deer.  We have several bits of footage of otter checking out the beaver.  It will have been the first time that these water loving species have come across each other for several hundred years.

“The thing I’ve been most fascinated by is how widely the animals roam across the site. They use the full range of habitat available to them, using the channels of water across the sites to move throughout their range, accessing food and exploring the woodland.

“The animals seem to have settled in well. They appear relaxed and healthy and are obviously enjoying the good weather and the bountiful food in the sites. The team is looking forward to seeing the sites change over the next few months and how the beaver adapt to their new surroundings.” 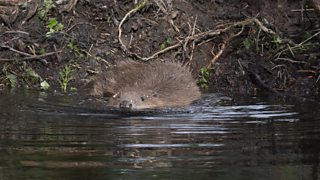 The enclosed beaver release is the first to be made by the conservation charity, as part of its ambition to create priority habitats for nature and to increase the diversity of species and wildlife numbers on the land in its care.  As nature’s engineers, they are also a natural solution to help tackle climate change.

As ecosystem engineers the beavers will develop wetland habitat, increasing the variety and richness of wildlife in the local landscape.

Their presence in our river catchments is a sustainable way to help make our landscape more resilient to climate change and the extremes of weather it will bring.

“The dams the beavers create will slow the flow, holding water in dry periods which will reduce the impact of drought. They will help to lessen flash-flooding downstream, reducing erosion and improving water quality by holding  silt and pollutants.

“Although we are introducing a species that used to live here in the wild, this project is all about developing our landscapes of the future, helping us respond to the challenges the landscape and communities now face,” continued Ben.

The beaver releases are linked to the wider work the Trust is doing on the estate through its Riverlands work, which includes the ‘Stage 0’ project on a tributary to the River Aller which began last Autumn which is about resetting rivers back to their original meandering state.

Although it will take several months for nature to take over, within days of restoring the stream, peregrine falcons, dragonfly and wagtails were spotted. 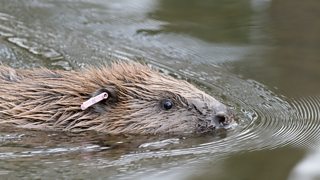 How to attract amphibians and reptiles into your garden