Barmy about bats...an insight into the species found in the UK

Bat you didn't know that!

The UK is home to a staggering 18 species of bat, 17 of which are known to be breeding here. Globally, bats make up almost a fifth of all mammal species!

Other vagrant species include the greater mouse-eared bat. This bat was officially declared extinct in the UK in 1990, but a solitary individual has been hibernating in southern England since 2002.

What do bats eat?

All UK bats eat insects and each different species has a preference for their desired banquet, including; midges, moths and beetles.

A single common pipistrelle can eat over 3,000 insects in a one night!

How do they feed?

Bats are not blind but at night their ears are more important than their eyes. As they fly, they send out very high pitched calls. The returning echoes help the bat make out the size, shape, direction and proximity of the object - and this includes it's prey. As they move closer toward their prey their echoes become shorter in length, and when they’re just about the grasp their meal, their call takes on the sound resembling someone blowing a raspberry! This system of finding their prey is called echolocation.

Though some people may be able to hear the faint calls that bats make, many are too high in frequency to be heard by the human ear. Therefore, a bat detector is required to determine which species it is by studying its peak frequency and also, to understand what they are doing; foraging, socialising or commuting. 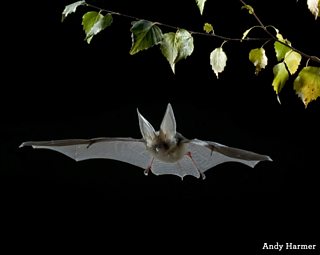 Where do they live?

Bats are nocturnal, elusive creatures and are very sensitive to disturbance. By law they are protected under the Wildlife and Countryside act (1981, as amended). Bats, although widespread throughout the UK, some species numbers are declining.

Different species of bat prefer to roost in different habitats; some prefer hollow trees, caves and cool, dark crevices, whilst others prefer to roost in loft spaces, under tiles, or in basements or outbuildings. Bats are generally very clean and spend a large amount of time grooming and socialising within roosts.

Our smallest bats are pipistrelles weighing between 4-7g, with a wingspan of 18-25cm. Our largest bat is the noctule, which can weigh up to 40g with a wingspan between 33-45cm.

Mating for bats occurs between summer and autumn. Pregnancy for bats lasts between six and nine weeks and the length of their pregnancy depends on the species and is influenced by weather, climate and availability of food - if conditions are unsuitable, then they'll delay implantation, until conditions are optimal, or they'll abandon the pregnancy if they're likely to fail. During June-July the females gather together in maternity roosts and usually give birth to a single pup. Mother bats keep their young close and nurture them throughout the suckling stage for four to five weeks until they are old enough to fly. Once at this stage, they then begin to venture out from the roost to forage for food. 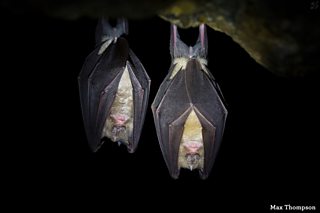 What do I do if I know I have bat roost?

Bats are protected by law and are incredibly sensitive to disturbance- so if you are lucky enough to have bats roosting in your roof, outbuilding or garden, then please leave them be, as it is an offence to deliberately destroy a roost, catch, injure or kill a bat. Bats are generally very clean and cause very little disturbance, if any! So enjoy them from a distance and appreciate that they’ve chosen to take up residence with you!

Here are a few tips to make your place more bat friendly!

Greylags: The fall and rise of Britain’s only native breeding goose