Whilst our trips to the beach may become fewer as the winter months draw in, an abundance of marine life continues to visit our shores. 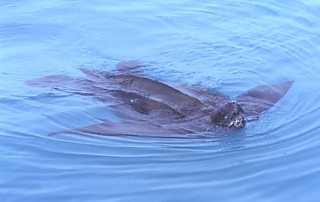 We may be familiar with the amazing migratory abilities of our over-wintering shorebirds, but few know that our winter seas also regularly host some exotic reptiles. Sea turtles are usually associated with warmer waters, but of the world’s seven sea turtle species, six have been recorded in UK waters. The Marine Conservation Society citizen science sightings programme provides an important log of turtles that arrive in UK waters. Not only does this information help us understand more about the wildlife in our seas, but it also provides support to a national network of UK turtle rescuers. If you see a turtle, please be sure to tell us! 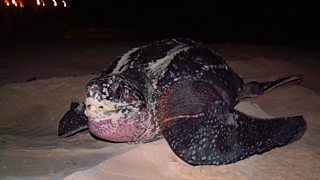 The world’s largest marine turtle, the leatherback, is the species most commonly spotted in UK waters and is amongst the most highly migratory animals on earth. In fact, leatherback turtles have been known to travel as far as 10,000 miles or more in search of jellyfish rich waters. Each summer, leatherbacks migrate to UK waters to feed on jellyfish and as autumn approaches, the turtles can still sometimes be spotted around our shores before migrating to more tropical waters further south for the winter. Leatherback turtles are the most widespread reptile on Earth, and their unique ‘warm-blooded’ physiology, bizarre for a reptile, means they have been spotted as far north as the Arctic circle and in ocean south of New Zealand. It is not unusual for leatherbacks to grace the seas around Shetland. 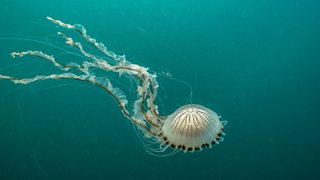 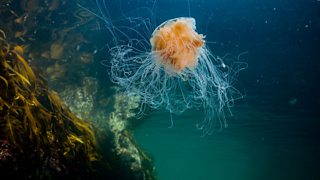 Five other species of turtle have been found in UK seas – but they really aren’t supposed to be here. Green, hawksbill, Kemp’s ridley, olive ridley and loggerhead turtles - known as hard-shelled sea turtles - have all been recorded in UK waters, usually as stray juveniles that have somehow been blown into our chilly seas during the autumn and winter months. These turtles are much smaller than the leatherback and usually inhabit the tropics or sub-tropics. Some of these smaller species are endangered, including the Kemp’s ridley turtle, which was close to extinction in the 1980s, but is recovering with good conservation now, although numbers are still critically low. Hawksbill turtles are also critically endangered, hunted over the years for their beautiful shells, and are the most tropical of all marine turtles, living around the tropical coral reefs and lagoons of the Atlantic, Pacific and Indian Oceans. There has only been one confirmed record of a hawksbill turtle in UK and Irish waters, when the animal was found accidentally entangled in a fishing net in the 1980s. 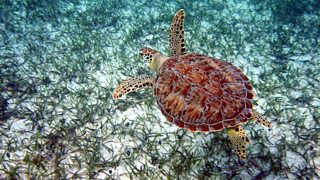 The loggerhead is the most frequently encountered hard-shelled sea turtle in UK waters, almost always recorded as stranded juveniles either dead or in very poor condition. Like all our turtle species, as dinner-plate sized juveniles, these youngsters cruise the open ocean, feeding opportunistically on anything they find at the surface. They are transported by ocean currents, and occasionally they get pulled into the North Atlantic Drift and carried toward the UK. Hard-shelled turtles don’t tend to feed at temperatures below 15°C and will become comatose during prolonged exposure to temperatures below 10°C, so when they reach our shores during the colder months they are in real trouble. They often appear dead, but they may actually be comatose – also known as cold-stunned - and with specialist care can be rescued and nursed back to good health. 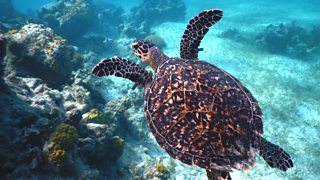 Turtles face a number of threats wherever they are found. They often mistake marine litter, especially plastic, for jellyfish when they find it floating in the water and will eat it. Turtles have been found dead from starvation with plastic in their stomachs, which have been blocked by the indigestible litter. Marine turtles can also become entangled in fishing gear and, whilst they can happily hold their breath underwater while feeding, will become stressed and drown when trapped underwater by fishing gear. That is why we should always try and give them a helping hand when we can.

Hard-shelled turtles that wash up on UK shores are likely to be either dead or cold-stunned, but either way they should not be placed back in the sea. Dead turtles can be collected for post-mortem, revealing insights into the causes of death, and live turtles can be rescued and rehabilitated. Follow the UK Turtle Code: wrap up the turtle in a towel soaked in seawater, place the animal in a sheltered and secure place on its belly and report it as soon as possible – but please do not put them back in the sea!