How do we film a golden eagle nest?

Jim Manthorpe is the man bringing us such spectacular images of our golden eagle nest. Here's how he does it.

When I was a ranger on a remote West Highland estate I spent a lot of time with my local pair of golden eagles. I will always remember the first time I set my binoculars on the high cliff where I had been told they nested. I scanned the black ledges for the eyrie and felt a buzz of excitement when I spotted the huge thatch of sticks and great woodrush. And then, as I looked through the binoculars I got an even greater thrill when the male bird shot into view and landed on the nest. It was, for me, the start of a mild obsession with our most sophisticated of raptors and since then I've spent many an hour shifting about uncomfortably in small hides near eagle eyries. So when Springwatch asked me to do just that at a golden eagle eyrie in the Trossachs I got myself ready for some quality time alone in a hide on a remote mountainside, getting to know the Springwatch goldies.

In the UK we think of golden eagles as quintessentially Scottish birds (more so now the last eagle in England appears to have disappeared). To us they are synonymous with the crags and moors of the Highlands but goldies are one of the most widely distributed species of eagle. You'll find them in the tundra of North America, the Russian steppe and the mighty Himalaya. But to me they will always be a Highland bird. I'll be walking along a remote glen and think, this is eagle country. I'll spot a crag with a rowan sprouting from it and think, if there isn't an eyrie up there, there should be. Golden eagles epitomise these wild places. 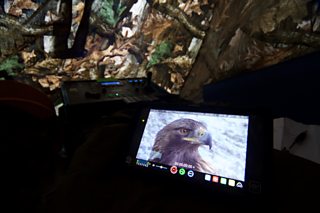 The Springwatch nest was in one of these glens. When Dave Anderson the Forestry Commission conservation officer, led us towards the location I spotted the crag immediately and knew that it was a fine spot for eagles to construct an eyrie. As it happens it was the first time they had been known to use this particular ledge. A group of us, led by Dave and Simon from Forestry Commission Scotland and Neil Anderson from the Springwatch camera team, carried the kit towards the crag and, as quickly as we could, installed the remote camera close to the nest. My home for the next few weeks would be in a hide, tucked away on a wooded slope of mossy boulders, out of view of the nest. From there I could watch and film the intimate details of the life of this pair of goldies and their single chick.

Golden eagles are particularly sensitive to disturbance and we couldn't have installed the camera without a licence from Scottish Natural Heritage or without Dave's expert knowledge, not just of eagles in general but of these particular birds. Every pair of eagles is different and he knew that these ones were relatively tolerant to a brief spot of disturbance. And so it was. After the rest of the team had gone I was left alone in the hide. The monitor showed the huge nest and that lone downy chick looking vulnerable and helpless. It was a mighty relief when the female eagle flew back in, gently lifted her great yellow feet and talons around the chick and settled down on it. And later the male flew in with prey. It was all systems go. I could start filming.

Looking after a wild weasel