Liking lichens: What to watch this winter

“There is a low mist in the woods—
It is a good day to study lichens.”
― Henry David Thoreau, A Year in Thoreau's Journal: 1851

Last spring, an eruption of wild flowers on road verges, garden lawns and eerily unused playgrounds lifted the spirits of many. As we now contend with the short days and cold nights of a deep winter lockdown there is, thankfully, still so much solace to be found in nature.

Enter lichens, those scandalously unheralded building blocks of the natural world that so often fly below the radar. Lichens cover up to a staggering 7% of the planet’s surface yet there is still so much to learn about their myriad roles.

Lichens look like a single organism, but are actually a stable symbiotic relationship between a fungus and algae and/or cyanobacteria that arrived on Earth at least 250 million years ago. Their importance to people and planet may not grab the headlines but it is immeasurable; lichens provide food, shelter and nesting material for birds, mammals and insects and their place in ecosystems is so hard-wired that moths on the run from a predator will mimic bark lichens. Many foods, perfumes, dyes, medicines (antibacterial and antiviral properties) and foods are directly derived from lichens. And lichens are 'natural' indicators of air quality as many species are very sensitive to pollutants such as sulphur dioxide and nitrogen.

The great thing about lichen spotting is that it is open to all and you need not venture far at all. Lichens can be found growing on bark, rocks, or walls; in woodlands, deserts, or even tundra. In fact, from the patio to the graveyard there’s really very few places lichens don’t manage to eek out a viable existence. This said, there is one place not to expect many species – the lowest parts of trees in parks are often devoid of lichens thanks to the overly enriching effect of dog-pee on bark. 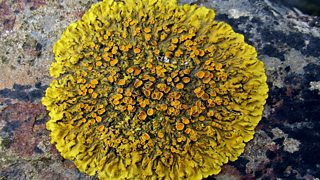 With or without a lens, here’s where to head on your next daily exercise in search of easy-to-find beauties :

Efforts to tackle air pollution mean more urban environments are now ablaze with lichen interest. Many London streets are paved in Lecanora muralis, that lichen that looks so like chewing gum it is, err, named Chewing gum lichen. Keep your eyes peeled for:

The starburst lichen, Xanthoria parietina, which is very common on twigs, branches and trunks on trees in gardens, parks, car parks and the like. Easily spotted as it is bright orangey yellow. The yellow colour is from a chemical called parietin, and this gives the lichen protection from harmful UV light – it’s very own sunscreen.

Chewing gum lichen, Lecanora muralis, shows just how lichens seems to be able to colonise and live quite happily in the most inhospitable environments - it is found growing on rocks in Mexican deserts as well as supermarket car parks throughout Britain.

The common greenshield lichen, Flavoparmelia caperata, along with a close relative, is common on trees, rocks and walls, although is more common in the south and west. It often stands on account of its pale green colour, and wrinkled surface. 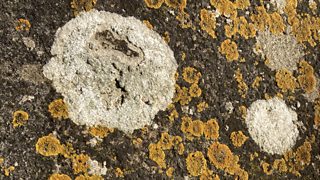 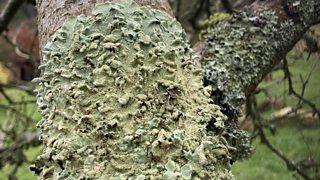 Churchyards can be a sombre place but they are alive with a wild riot of lichens that populate the varied geology of gravestones. In these undisturbed oasis’ of tranquillity slow-growing lichens have flourished for centuries free from disturbance. Of the over 2,000 lichens, over a third have been spotted in churchyards and some single sites boast well over 100 species. You’re most likely to chalk off:

The dog lichen, Peltigera membranacea, grows on the ground in open grassy or gravelly areas and on rocks. It changes colour, silvery grey when dry and olive green or brown when wet. Look at the underside and you’ll the teeth that give it its common name and led to it being used as a cure for rabies.

A firedot lichen, Caloplaca flavescens, so-named as they have bright orange or yellow discs on the surface which produce the lichens spores. This is easily spotted, forming yellow circular patches on gravestones, walls and rocks, but only those with a more alkaline chemistry.

The map lichen, Rhizocarpon geographicum, so named as its pattern of black on a greeny yellow background looks like a map.  It is also found on gravestones and rocks, but only those with more acidic chemistry. It is also known as the ‘space lichen’, after it survived days of exposure in space before being brought back to earth where it carried on quite happily apparently unharmed. 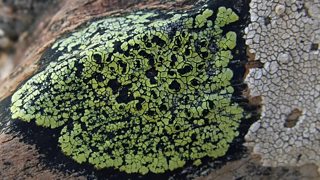 The woods - wet and wild best.

One of the very best places to spot lichens is South West England’s Atlantic woodlands where Plantlife and partners is undertaking the Building Resilience conservation project. In Cornwall, Devon and Somerset woods an array of special lichens occur, especially on ash, willow, rowan and old oak. There you might well find Barnacle lichens, Elf ears, Parchment lichens and Kidney lichens that have benefitted from clean air and sensitive woodland management. The slopes of river valleys such as the Barle are a great place to rummage.

Even if you’re not somewhere wet and wild you can still see lots of lichens in woods. The matchstick, pixie cups and reindeer lichens, a genus called Cladonia. These are a very varied and grow in many different habitats; the matchsticks and pixie-cups on tree trunks and rotting stumps, on walls, rocks and earthbanks, and the reindeer lichens on the ground and on rocks. Oak moss, Evernia prunsatri, is not a moss at all, despite its name, but a shrubby lichen most often found on twigs and branches. It’s becoming more widespread and common now that sulphur dioxide pollution is declining. It is harvested on the continent for use in perfumes. Grey crottle, Parmelia saxatilis, a common lichen in many habitats, especially on tree trunks. It was used to dye wool for Harris Tweed, giving a deep red colour, and these lichen dyes gave the Tweed its distinctive smell. 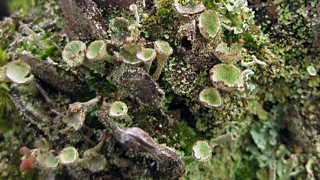 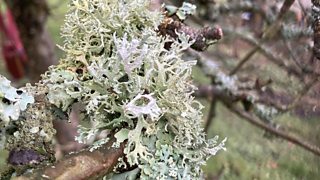 Oakmoss lichen on an apple tree by Archie Thomas