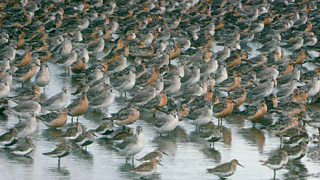 Knots are amongst the thousands of migrant birds heading to our shores in huge numbers at this time of year. Image by Chris Gomersall

If you’ve seen the recent footage of record numbers of knots flying over RSPB Snettisham then you can’t argue that Autumn is an incredible time of year to see birds in the UK!

Migrants arrive in their thousands from northerly and easterly breeding grounds which will soon be under snow and ice.

Our winters are much milder in comparison, and the food plentiful. Whilst many birds like finches and thrushes make the most of our fruit and berry glut, waterfowl and waders head to our estuaries and wetlands which teem with the shellfish, aquatic insects and small fish they love.

Importance of The Wash 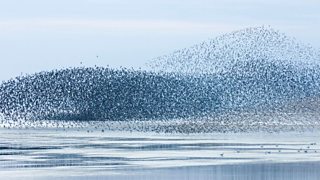 Knots produce a true autumn spectacle when they rise into the air at once and perform an amazing aerial display! Image by David Tipling

Knots migrate from the arctic circle, stopping only infrequently on their journey. Snettisham is a favourite spot as they love to feed on the vast mudflats of The Wash, arguably the UK’s most important estuary for migrants. Higher tides cover more of the mudflats on just a few days at this time of year, which forces the feeding birds into the air en masse, causing an awesome spectacle.

All over the UK, birds such as pink-footed geese, whooper swans, wigeon and dunlin have migrated from Greenland, Iceland, Scandinavia and Russia, to join our breeding pairs. They’ve faced treacherous journeys over land and seas and for them, these wetland areas are not just a respite but a lifeline. 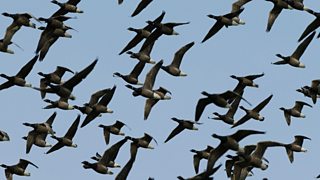 After long, exhausting journeys faced by migrants like these Brent geese, our wetlands are a lifeline. Image by Andy Hay

They act as a kind of service station for passage migrants looking for a rest and refuel to break up their journey south, whilst for others, it is a haven for the whole winter.

These sites are of incredible value – salt marshes, estuaries, fens, swamps, peat bogs - they are all fantastically productive ecosystems which sustain so much life. They are rich in biodiversity whilst playing a vital role for humans in storing carbon, helping to mitigate flooding and protecting coastlines, making them a huge weapon in our fight against climate change.

But they are also becoming increasing rare habitat. In the last century the UK has lost 90% of our wetlands due to things like urbanisation and agriculture – the Wash itself has been under threat – so  we need to protect existing sites and restore others wherever possible.

Benefits for nature and people 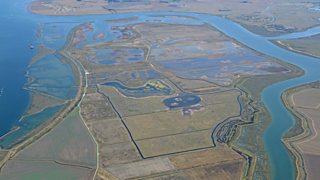 Many RSPB wetlands are areas previously altered or under threat, like the Wallasea Island wild coast project, Europe’s largest coastal habitat restoration scheme, which is restoring marshland lost due to coastal erosion and rising sea levels.

Creating habitats of mudflats, saltmarsh, brackish marsh and saline lagoons provides homes for a wide range of birds and wildlife. The site also locks up two tonnes of carbon per hectare per year and helps prevent flooding.

Or Newport Wetlands, where partnership working produced this extraordinary nature reserve to help mitigate habitat loss from the Cardiff Bay Barrage scheme. Part of the site is a reclaimed fuel ash disposal site. It’s now one of the best places in Wales to see migratory wildfowl and waders.

Knowing both what wildlife require from wetlands and what advantages they bring people allows us to design these reserves for the benefit of everyone. It also means they’re some of the best places to see Autumn migration spectacles!