For mammals such as hedgehogs, dormice and bats, hibernation is much more the Big Sleep. When they hibernate, these mammals adjust their whole metabolisms. Their breathing rates and heart rates fall dramatically, their body temperatures drop to a few degrees above their surroundings and they put on layers of fat to insulate them from the winter cold.

Why do these mammals hibernate and not others? It’s all about food supply and body temperature. Mammals are warm-blooded and produce their own internal central heating, unlike lizards or snakes which need to sun-bathe to get warm. To produce this much heat, mammals need a regular food supply to give them energy. Bats and hedgehogs eat mainly invertebrates such as insects, spiders and molluscs which are much harder to find in winter and so it makes sense to take things r-e-a-l-l-y   s-l-o-w and conserve energy at this time of year.

Some invertebrate-eating-mammals don’t hibernate, shrews for example, but these are very small and short-lived so can service their energy needs more easily. They can feed deep in cover or under snow where the air temperature is higher and there is plenty of food such as worms and beetles.

Mammals such as squirrels and badgers will spend some time asleep if the weather is very cold, but are usually active throughout winter. You may see hedgehogs and bats active in winter too if it becomes mild. This is not always bad news and most hedgehogs wake up at some point in winter to feed. However if their weight drops below a certain level, they may not have enough fat reserves to see them through to spring. 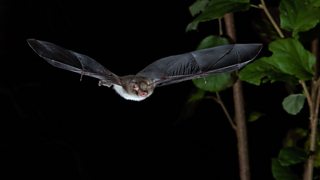 Bats lead high-energy lives and feast by night on insects which they catch mainly in flight. In winter when this food isn’t around, they have to go into torpor, controlling their body temperature and slowing down their metabolism to conserve energy, otherwise they would die.  A bat with an active temperature of 38°C in summer can lower its body temperature by 25°C  to match its winter hiding place in  a hollow tree or  even down to 2°C to match the temperature of a cave. At this low temperature it uses just 1% of its normal summer resting temperature. Bats can put on fat, not by eating more, but by going into torpor after eating, so saving energy.

Bats choose their hibernation sites with care and many species go underground into caves, old mine-shafts  and cellars. Some bats cling to walls, while greater and lesser horseshoe bats hang like leathery plums from ceilings. The commoner pipistrelles use old buildings and our biggest bat, the noctule likes tree-holes.  It is illegal to disturb bats at any time without a permit, so if you’re lucky enough to find them, leave them hibernating in peace .

Torpor can make bats sluggish and then they are in danger, sometimes from the most unexpected predators. In Hungarian caves  hibernating pipistrelles were attacked by great tits which pecked and killed the bats as they were rousing from winter sleep. 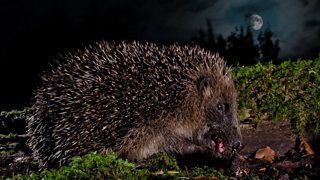 Your garden hedgehog eats mainly insects and molluscs which are hard to find in winter so it can’t produce enough energy to heat itself. Its answer to this problem is to reduce its  winter “energy bill” by 90% by lowering its body temperature and hiding in a snug dry place such as a pile of dry dead leaves or a woodpile.

What makes a hedgehog want to hibernate? It’s not the time of year that matters, but a combination of food shortage and lowering temperatures which trigger the need to slow down. Before going into hibernation, hedgehogs pig out and put on a layer of thick white fat to insulate them and provide energy. They can double their weight in a few weeks in autumn. They also store brown fat near the heart which they burn gradually throughout winter. This warming effect on the heart muscles, helps the hedgehog’s blood circulate more efficiently. Hedgehogs hibernate curled into a ball so that their prickly backs are exposed and their tummies are protected. They have sweat glands on their tummies but not on their backs , so that when they’re hibernating they lose hardly any water through sweating.

Hedgehogs usually hibernate between December and late March. They  often wake up in winter and may walk around. They aren’t necessarily in trouble and this is natural behaviour. But they are at risk if their weight drops and if a hedgehog seems thin or small and stays around for a while in winter, it is worth contacting your local RSPCA or wildlife rescue centre. But do wait... many hedgehogs will go back into hibernation.

You can help hedgehogs by providing hidey-holes, log-piles ,wooden boxes on their sides and lots of dry dead leaves and straw for them to make their winter beds. Avoid disturbing piles of leaves in winter and, of course, by not using pesticides like slug and snail-killers... Then the hedgehogs will have food when spring arrives. 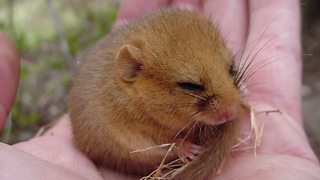 Dormice are famously sleepy, though they don’t curl up and snooze in teapots like the famous dormouse in Alice In Wonderland. In parts of northern Europe  an old name for the hazel dormouse was the Seven Sleeper, because it was supposed to doze for seven months of the year. This is a slight exaggeration, but dormice do spend a lot of time asleep and hibernate between October and April, usually in nests of grass and leaves on the woodland floor or low down in dense shrubbery. They weave these tennis-ball sized nests with their paws and teeth. Dormice eat small insects as well as nuts and pollen and are susceptible to cold weather, so can go into torpor even during summer, to save energy. They are hard to see, but are sometimes found by dogs snuffling among woodland leaves in winter.

Hibernation could be a useful long-term strategy for the dormouse. By reducing its heart-beats, it may prolong its life and be able to outlive similar-sized winter-active mammals like wood mice or voles. 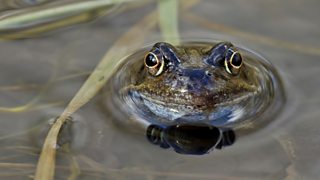 Unlike toads, which hibernate on land, most frogs spend the winter underwater where their body temperature is very similar to that of the water around them. You can often see them swimming under ice. They are very tolerant of low temperatures, keeping to the bottom of frozen ponds where it can be up to 4°C  higher than at the  surface.

Common frogs can even survive when their hibernation ponds freeze solid. Frogs in a pond in Lancashire froze so that they were hard to touch and ice crystals formed on their skins. Later they thawed out and hopped away. Some North American frogs have natural anti-freeze in their bodies to help them survive sub-zero conditions and it is likely that common frogs do as well.

The  grass snake spends its time in overgrown places and near water where it hunts for amphibians and small fish. It’s a sun-lover which doesn’t make its own heat but relies on the sun to warm its blood and provide it with energy for hunting. After a swim, it  basks to restore its body temperature. It also needs heat to hatch its eggs,  but this comes not from the sun, but from fermenting compost heaps, piles of grass cuttings or even sawdust in hollow trees.

So how does a sun-loving reptile stay alive in our icy winter? To avoid chilling surface temperatures, grass snakes go below ground between October and late March to avoid frosts which would kill them. They like old mammal burrows, deep cracks and crevices in rocks and beneath tree roots. Sometimes they hibernate alone, sometimes in groups and will go deeper if the weather deteriorates or, if they have company, snuggle more tightly together. Their body temperatures can drop to less than 0 to 5°C when  hibernating. 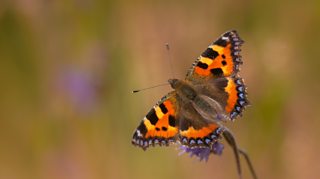 Insects don’t hibernate as mammals and reptiles do. Instead they go into diapause, a period of suspended animation when they stop growing. They can spend this time as an egg, a larva, a pupa or an adult. Several butterflies over-winter as adults, including the small tortoiseshell which takes up residence in the corner of a cool spare room or a garden shed and will often wake up and flutter at the window on warm winter days. When you see them doing this, catch them and put them in a cool place like a garage or shed or hollow tree and they will settle down again.

Several of our moths also spend the winter as adults. Sheds, caves and old mines are ideal hidey-holes for brightly-coloured herald moths. Often you can find them covered with dew droplets which cling to their wing-scales. If they choose a spot which is too damp,  they are too drowsy to move out of the way of golden-shelled coffin snails (Oxychilus cellarius) which nibble their wings and  sometimes eat the moths alive. A very slow way to go. 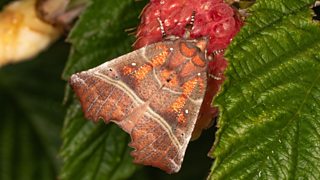 Liking lichens: What to watch this winter