Nature is continuing to respond to the mild weather with records of trees coming into bud burst and snowdrops and hazel flowering.

The early sightings of flowering species conform to a long term trend of spring gradually arriving earlier in the UK, highlighted by data recorded on Nature’s Calendar since 2001. Over the last 25 years flowers have bloomed up to 12 days earlier than previously. 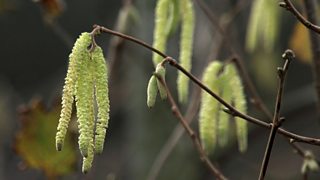 So far we have records from members of the public of snowdrops, lesser celandine and hazel in flower, along with elder trees in bud burst and hawthorn coming into leaf.

Did you know that regarded by many as a wildflower, snowdrops were not recorded as growing wild in the UK until the 1770s? Most colonies are probably garden escapees though it is still thought some may be native, particularly in southwest England. Snowdrops are certainly native to a large part of Europe, as far north as Brittany, where they grow in damp woods and meadows. The average UK flowering date is 27 January, but in eight years out of the past 14, we have had a first sighting in November!

Bright yellow lesser celandines are one of the first woodland flowers of the year. The shiny flowers have eight to twelve petals and glossy dark green heart-shaped leaves. It’s family name in Latin: Ranunculus means 'little frog or tadpole', this might be a reference to the damp conditions that they are commonly found in  or to the fact that the flower buds look like tadpoles.

The poet William Wordsworth wrote in his ode to the celandine: "I have seen thee, high and low, Thirty years or more, and yet T'was a face I did not know."

On average we expect to see celandines appear by 5 March but in several years during the project we have had first sightings before even Christmas has passed.

Anyone can get involved and recording is simple and we need your help. To find out what flowers plants trees and shrubs to record all year round.