There's no such thing as a "sea gull"

Sea gulls get a lot of bad press in the UK. Many people despise them for their tendancy to hang around our towns and cities in the hunt for food. But what many don't know is that there is no such thing as a 'sea gull', instead many different species live in the UK.

There are 50 species of gulls in the world, in Britain we have six species of commonly occurring breeding gulls: 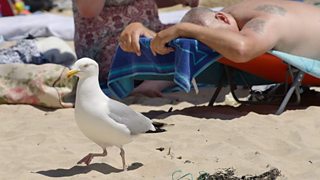 A herring gull, a common sight at the British seaside.

Some gulls - namely the herring and less black-backed gulls - have a wingspan of approximately 1.4m. In comparison the average British woman stands at 161cm tall.

They're nesting more and more on urban rooftops, drawn to our towns and cities due to an abundance of suitable nesting habitats, ample food and a relative absence of predators.

The birds will defend their chicks and nests, as you might imagine - but they rarely attack with their beaks and usuallly hit back with their feet.

All British gulls are protected by the European Birds Directive.

"I went behind the scenes at Springwatch and this is what it's like..."

The true story behind "The Lark Ascending"