Is the Sparrowhawk an awe-inspiring master of the skies, or an uninvited and unwelcome garden pest? 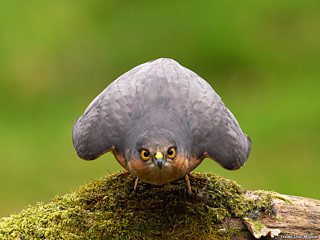 Imagine this. You’re enjoying a morning brew in your garden. The blue tits are calling to one another, the goldfinches are feeding on your Nyjer seed and the blackbird is staking his claim over the land with his fluid, musical song.

You’re breathing in the tranquillity, basking in the glory of our British wildlife.

Suddenly, the blackbird’s song ceases to flow. Instead it becomes that frantic chip chip! – The intruder alarm of the natural world. The finches shoot for cover, the tits have vanished. And over the hedge shoots a flash of red, a yellow glint, the barred breast of a sparrowhawk. It’s a scene that might be familiar to anyone who gardens for wildlife.

We do get correspondence to Springwatch from people sharing stories like this one. For some viewers this makes the sparrowhawk an unwelcome guest. This bird of prey, however, has suffered its own misfortunes over the years. 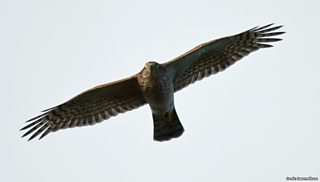 Sparrowhawks can be identified by their short wings and long, blunt tail.

Sparrowhawks were once rare, and extremely endangered birds on our green and pleasant land. Their demise in the UK has been attributed to a number of factors including persecution and the increase in certain pesticides. In the 1950s, the introduction and widespread use of organochlorine pesticides, such as DDT, pushed an already endangered raptor to the brink of extinction. These pesticides made their way up the food chain and caused raptor eggs to be formed with soft shells. Often this meant they broke before the chicks could hatch.

Without help, they would have disappeared from the UK. Their fortunes began to revive between 1970 and 2005, with the banning of DDT and the introduction of the Wildlife and Countryside Act. Sparrowhawk numbers increased 108% during that time. It’s estimated today that there are 35,000 pairs currently breeding in Britain.

There has also been research into how the increase in Sparrowhawk numbers has affected our songbird populations.

The crash in the 1950s and 60s allowed researchers and scientists to study numbers of songbirds under two very different conditions. One famous study was that of blue tits and great tits in Wytham Woods, Oxfordshire. Whilst it was observed that the numbers of breeding tits within 60 metres of a sparrowhawk nest did reduce, the overall tit population increased alongside the presence of Sparrowhawks. 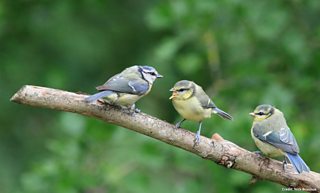 A second study in an oak wood in Surrey monitored songbird populations over a 30-year period. This study ran from 1949 to 1979, covering the presence, demise and 13 year absence, as well as the recovery of the sparrowhawk. Over the course of the study, 9 out of 13 songbird species increased in numbers (even when the sparrowhawks returned.) Only one bird – the song thrush – saw a decline, which mirrored the national trend. The Surrey study concluded that sparrowhawks had not reduced populations of songbirds.

The results seem to conflict with the fact that Sparrowhawks do prey on songbirds and therefore more sparrowhawks should suggest less songbirds. So why did the growing population not affect songbird numbers in these studies?

Naturalists concluded that, even without predation, the number of fledgling songbirds remained constant because of the amount of food supplies available. For example, if a blue tit successfully fledges a full, 14-egg clutch, then there are 14 more blue tits occupying that area. If none of these fledglings are predated and they all survive until the winter, then food becomes scarce, temperatures drop, and around a third of the young blue tits will perish. It’s estimated that up to 34% of fledgling birds do not survive their first winter.

On the other hand, it has been calculated that Sparrowhawks need to take about 34% of songbirds in order to survive. So the Sparrowhawks are taking an otherwise doomed surplus of songbirds, that would not survive their first winter - with or without predation. 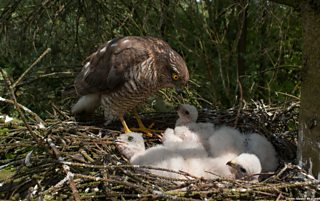 Sparrowhawks have made a dramatic comeback over the past 30 years.

Sparrowhawks are one of our native species of birds celebrated for their majesty, speed and agility. They’re nature’s Top Gun, with awe-inspiring skills and, maybe, an avian predator that we don’t need to vilify for taking our garden birds.

We would also like to hear your views on the subject. Please use the comments section below to have your say. We ask that you respect the views of others, even if they differ from your own. In the past we’ve found that contrasting opinions have brought interesting and useful extra insights to our blog, and we encourage this kind of contribution to a respectful discussion.

Sand lizard reintroduction - an exciting update from the field!

Where have all my garden birds gone?