The science of eggs

Dr Steve Portugal from the Royal Holloway University of London explains the mystery of the not-so-simple birds egg.

The eggs of birds present some of the most striking colours and diverse patterns to be found in the animal kingdom. What makes this spectacle even more impressive, is that this diverse range of colours exhibited by bird eggshells is produced by only two pigments; protoporphyrin, responsible for the red and brown hues, and biliverdin, producing the bluer shades. The eggshell itself has to protect the developing embryo from the threats that the outside environment can present. Such threats can include too much sunlight and harmful UV rays, unwanted attention from potential predators, microbial infection, and the menace that is parasitic cuckoos. In essence, the eggshell is working to ensure that the young inside makes it to hatching day, whereas a series of external factors are trying to do the exact opposite. This is where the pigments of eggshells really come into their own, and together they perform some remarkable functions, including some that have only recently been discovered.

It’s no coincidence that the eggs of species who traditionally nest in open, exposed, habitats are more heavily pigmented than those species that typically nest hidden away in burrows and holes in trees. Here, perhaps the most obvious function of pigment is to act as camouflage for the egg. A sparkling white immaculate egg, for example, would stand out somewhat against the brown background of a heathland or upland moor, so the dark pigments, or maculation as its known, acts to camouflage the eggs against potential predation. The function of this dark pigment does not end there though. The pigmentation acts to thermo-regulate the internal temperature of the egg, acting as a buffer between the embryo and the outside world. It does this by preventing overheating of the egg, through reflecting the sunlight off the pigmentation, rather than allowing it to be absorbed through the shell. Here, the pigment serves a dual function, as it also works to reduce the amount of harmful UV rays from the sun that can penetrate the shell and damage the embryo, effectively acting like sun cream does on our skin.

While the eggshell works to control the amount of light entering the egg, some sunshine is essential for the development of the chick. The sunlight also brings out another fascinating function of eggshell pigmentation – its photodynamic antimicrobial properties. Protoporphyrin, when warmed by the sun, can virtually eliminate gram positive (e.g. staphylococcus) bacteria from the outside of the egg, acting as an external immune system for the developing embryo. 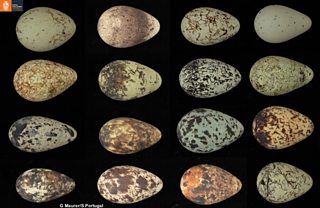 Guillemot eggs are perfectly adapted for life on the cliff face, as their pointed shape means they don't roll far

Biliverdin, the bluer hues, is thought to play a slightly different role within the eggshell. One theory focuses on the prevalence of blue eggshells in breeding systems where perhaps the male needs some encouragement to do his fair share of the work. Such breeding systems are typically polygynous, where the male has multiple females. Here, biliverdin can act as a signal from the female to the male, about the quality of the clutch of eggs she has produced. Biliverdin is involved in immune and antioxidant defences in the adult bird, and the ‘more blue’ the egg is that a female can produce, the better ‘health’ that female is likely to be in. This is thought to encourage the male to invest more in that particular clutch and female, through food provisioning the female and subsequently the young. 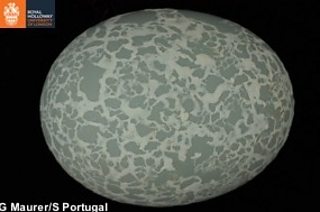 The many functions of eggshell pigment don’t end there, with other uses including structurally supporting the shell, avoiding cuckoos, helping parents recognise their own eggs, and preparing the chick for the daily rhythms they will experience once they hatch. So, by all means admire the beauty of the colours and patterns that are seen on bird eggshells, but think also about the varied and important roles that the pigments are playing, to ensure survival of the developing young, hidden away inside the egg. 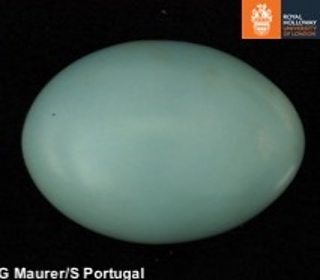 The Farne Islands - the place I call home